There's something profound and slightly unsettling about how much the idea of killing off politicians appeals.  At least for a reason like this one.  Let's face it - there's probably very few of us that haven't longed for something similar - if not actual death - than at least a tad painful - when it comes to one or other politicians.  Awful as that may sound.

WITCH DOCTOR'S VENGEANCE starts with a rather high minded and seemingly altruistic motive - the politicians are being killed off until they agree to the demand of stopping partisan politics.  It also starts off with a series of very clinical attacks - one death and one assault to get their point across.  The attacks then start to ramp up, and the law enforcement agencies are scrambling to identify possible suspects, and protect the parliamentary members.  Neither aim is made particularly easy by the politicians themselves, and if you think a Prime Minister who cannot get a major energy initiative approved can get a bit feral, try him when he's worried about his personal as well as political skin.

WITCH DOCTOR'S VENGEANCE is the first thriller from Andy L Semple - a Queensland based author with a background in Geology and Finance.  Quite where he got his insider view of politics I'm not too sure - but wherever it came from, he writes a good vicious politician.  This book has an interesting plot idea behind it - with a nice twist from the altruistic to the extremely personal.  There is a lot of action, and whilst there is a fair bit of violence it's nicely balanced and keeps the clinical nature all the way through - the killers themselves are very clinical / trained / organised and very precise and that's the way that the violence is also portrayed.

Of course it's a first book and there are some problems - for example, there's way too much explaining or telling, whereas a thriller really needs to have the action "act" in such a way as to show events to the reader - rather than constantly explaining them.  This over-wordiness did have a habit of slowing the action too much, and could make the plot disappear.  There is also a slightly stilted feeling to some of the dialogue, but realistic "reading" dialogue is tricky and I'd guess takes practice, especially when you're trying to make it seem quintessentially Australian.  Having said that, none of the faults are particularly surprising in a first book, and a little judicious editing will sort them out in the second book.

There does seem to be a second book in the wind (or at least that seems to be what the last page is hinting at).  I'll be really interested to see where it goes. 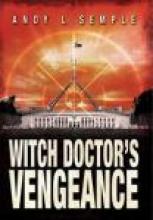 The night before a crucial Senate vote, one of Canberra's most powerful politicians is executed with surgical precision.  The assassins deliver a shocking ultimatum to the Federal and State Governments - "Stop your partisan politics and restore power to the Australian people or more of you will die!"

Only Jake Lachlan, a rookie Queensland Senator, holds a clue to the violence.  A sudden rash of political kills forces Jake to confront the spectre of a sinister conspiracy - bringing him face to face with one shocking truth after another with explosive implications for his country's future.