The third in the Peter Clancy series, BLURLINE takes Clancy to swinging London and the edges of the "red-top" newspaper world. Granted he headed there with high hopes of getting a job in slightly more salubrious circumstances, but needs must and when the money starts running low, a reputation built on the back of The Truth newspaper in Melbourne isn't going to help when it comes to "serious newspapers".

When Clancy lands himself a job on one of the even lesser of the lesser scandal rags, he ends up posing as a biographer ghostwriter, supposedly helping well known, and drug and alcohol addicted Olivia Michaels to write her own story.

Getting to meet Michaels is a big part of the story of BLURLINE as Clancy firstly dates, and quickly falls in love with the daughter of a very famous rock musician. One that he stupidly started out convincing he is a writer of thrillers, as opposed to a scandal journo. By the time he realises that his relationship with this girl means a lot to him, he's dug himself half way back to Australia and broken the shovel handle into the bargain. Plus he's agreed to help Michaels with her book, and his boss at the newspaper's very pleased about this subterfuge, as it gives the paper an insider view of the celebrity world. What Clancy doesn't bargain on is how dangerous the ugly secrets become, how much somebody doesn't want the dirt dished, and how far they will go to stop it.

There's something deliciously inevitable about Clancy working for a British red-top, living in a horrible little flat, above yet another take-away food place. Part of what makes that same stuff, different place feel right is the jolt that love and relationships bring to Clancy's life. The sense of time that these books work within is really strong in all of them, but possibly more so in BLURLINE. Add to that the minefield that Clancy is tiptoeing around in, dodging villains with distinctly antagonistic views to his book writing persona, and a girlfriend and her family who are going to have exactly the same reaction to his journalist persona if they ever find out.

The plot here has some inevitable elements about it, what with celebrity, and power and excesses of behaviour, but the details, and the who is / isn't involved aspects provide enough surprises to keep the reader well and truly hooked. To say nothing of good, fast pacing that combines with the characters and plot to make this into a real page turner.

Having been lucky enough to read all three books in this series now, it's pleasing to know there's a fourth on the way. If you've not been lucky enough yet to dip into these little gems, then you really should rectify that situation as soon as possible. 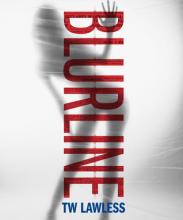 Australian journo Peter Clancy is in London this time, working for a notorious scandal sheet. While writing salacious stories on celebrities, Clancy poses as a biographer to dig the dirt on drug- and alcohol-raddled Olivia Michaels, once a star of the screen.

But the more he discovers about Olivia Michaels, the more deeply he becomes embroiled in ugly secrets stretching across the entertainment world to the highest echelons of society. Can Clancy succeed in his mission to blow the lid off Britain’s darkest secrets?