Frank Calder is a bit of a maverick.  Ex-cop / ex-soldier - current day "mediator".  He's the sort of bloke that gets called in to sticky situations where unusual solutions are required.  He's worked for the Carsons before.  When a crazed gunman took store staff hostage, Frank wandered into the situation to save the hostages.  Which he did.  Quietly, efficiently and unusually.

So when Anne disappears on the way home from school and a ransom demand is received by the family, the Carsons again turn to Frank.  He wants them to call in the police, but they did that once before and one of their own very nearly died.  This time they want to do exactly what the kidnappers ask and once they have Anne back, they'll deal with the kidnappers themselves.  Frank finds himself having to wade around in the families dirty French soap smelling laundry to get to the bottom of a possible motive.

SHOOTING STAR is classic Peter Temple.  The prose is sparse, the central character is a bit of a maverick with a heart, he has connections, he uses them.  The Carson families skeletons are all a bit on the unsurprising side - large, very wealthy families seem to have these little peculiarities, but the methods of uncovering them are fast, tight, and often quite funny.

All of the characterisations are interesting - Calder himself, his offsider Orlovsky, the Carson patriarch Pat, his sons, their sons, the wives, the granddaughters - the hired help.  And throughout the story there are those standout little passages that you can expect from Temple - the observational points.  Orlovsky as an immigrant in his own country, Calder as a man who only smokes when bad things are about to happen, Pat Carson and his whiskey bottle - all that money and that compound.

Wonderfully paced, with a good resolution, SHOOTING STAR is already a classic of Australian Crime fiction. 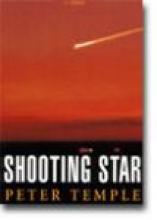 Frank Calder - ex-soldier and sacked police hostage negotiator - is just eking out a living as a mediator when he's approached by Pat Carson, patriarch of the dynastic Carson family. Pat wants him to deliver ransom money to kidnappers who've abducted his great-granddaughter, Anne. Frank urges Pat to call in the law, but he refuses, since police bungling nearly cost the life of another Carson child kidnapped years before.  So a reluctant Frank begins to deal with the kidnappers, and quickly becomes convinced that both Carson kidnappings were motivated by something other than money.

Over several feverish days, Frank searches for suspects in the web of Carson family businesses and deals, marriages and indiscretions, rivalries and intrigues. And all the while he knows that if his instincts are wrong the girl will surely die...