SCARED YET? is the second, standalone, psychological thriller from Jaye Ford. In this outing, readers are introduced to a woman who suddenly finds herself in a fight for her life against an unknown assailant for an unknown reason. When things escalate to her friends and loved ones, Liv doesn't know who to trust.

There is a lot that's not going well in Liv's life, and somewhere within all those problems, is the answer to who and why the harassment steadily ramps up. Because of the maelstrom surrounding her there are a lot of possible suspects. A bitter relationship with her ex-husband is the starting point, a knight in shining armour that shows up on the scene surprisingly quickly, the husband of her best friend and business partner. Then there's the business itself - teetering on the edge of failure, there seems to be secrets that her best friend Kelly is holding back. All in all, about the only person that seems to be 100% on Liv's side is her dying father, he of ex-boxing fame, and hence her own physical ability to fight back during that dreadful moment in the carpark.

There's quite a bit to like about Liv, particularly as there's a refreshing lack of fem-jep behaviour. Instead, there is the ever increasing sense of terror and tension that builds as the stalker continues to taunt with his little notes, and as whoever it is widens his threats to her friends and family.

The plot is carefully constructed around that build of tension, and whilst the final identity of the stalker is telegraphed, there's more than enough going on around that to really make the reader wonder, along with Liv, who to trust and where to turn. Part of the success of the book is that there is a real ability for readers to connect, and empathise with Liv. She's very believable and somebody that lots of people are going to be cheering loudly for.

SCARED YET? is a good thriller, fast-paced, peopled with believable characters who do believable and very real things in response to unreal circumstances. It's a chillingly frightening scenario that is all the more threatening because it feels exactly like something that could happen to ordinary people. The empathy comes from the reader's awareness that anybody could suddenly find themselves dealing with the unexpected, looking for a way to cope and fight back. Liv's reactions and behaviour feel exactly like something, in the heat of the moment, you'd hope you would have a red hot go at for yourself. 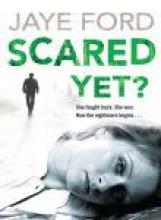 When Liv Prescott fights off a terrifying assault in a deserted car park, the media hails her bravery, friends and colleagues congratulate her - but an anonymous admirer tells her she should be more careful.

As police search for her attacker, her 'admirer's' advice turns to warnings, delivered to her home. Brave is not what she feels now: she's wary and suspicious and fearful - is it the assailant from the car park? Is it the man who found her there? Is it her ex-husband?

Soon her family is drawn into the stalker's focus - first her dying father, afterwards her young son - and she's not just scared, she's ripped apart by fear. Then her stalker makes the choice simple - to fight, or die. Are you scared yet, Liv?