Review - The Love of a Bad Man, Laura Elizabeth Woollett

It's a question that has preyed on a lot of people's minds over the years - why do women fall for, and stay with, the worst possible men? What author Laura Elizabeth Woollett has done is imagine her author's pen into the minds and lives of some of these women in her series of short stories - THE LOVE OF A BAD MAN. Which ends up presenting the reader with an interesting series of fictional looks inside real women's minds that feel very real.

The range of women is historically and geographically varied, and the style of storytelling beguiling enough to have reader's guessing some identities to start. For something with such a dark subject at heart, it's an interesting style, almost light at points. Which makes the idea that you're inside the minds of women like Eva Braun, a disciple of Charles Manson, Myra Hindley and Marceline Jones (wife of Jim Jones of Jonestown massacre infamy), for example, particularly chilling.

Chilling is the word for this entire collection. It's not a heavy-handed message, it's more subtle than that. It's in the way that this author has rendered these women so real, so believable, sympathetic and even likeable in some cases, despite the dreadful things they condone or participate in. All in the name of love.

There are twelve stories in total in THE LOVE OF A BAD MAN, and whilst each one can be read reasonably quickly, you will undoubtedly find yourself going back to re-read. Which is well worth the effort as each re-read reveals different layers and even more questions than you might have started out with. 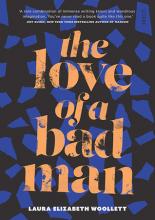 A schoolgirl catches the eye of the future leader of Nazi Germany. An aspiring playwright writes to a convicted serial killer, seeking inspiration. A pair of childhood sweethearts reunite to commit rape and murder. A devoted Mormon wife follows her husband into the wilderness after he declares himself a prophet.

The twelve stories in The Love of a Bad Man imagine the lives of real women, all of whom were the lovers, wives, or mistresses of various ‘bad’ men in history. Beautifully observed, fascinating, and at times horrifying, the stories interrogate power, the nature of obsession, and the lengths some women will go to for the men they love.