DYING LIGHT is the follow-up book to the much talked about and acclaimed COLD GRANITE and it maintains the high standard that the first book in the series reached.

It is summer in Aberdeen, the sun is shining and it is not raining anywhere near as much as it does in winter. With his love life sort of looking up and his working life running pretty well par for the course, the major downsides to the entire season seem to be that somebody is killing prostitutes and DS Logan McRae has been moved to DI Steel's "Screw-Up" squad. One botched raid, one severely injured uniformed PC and Logan's gone from Police Hero to another Internal Affairs investigation in the blink of an eye.

The focus of this book switches from DI Insch and his team (although he is still there and working on a fatal arson attack) to DI Steel and her Screw-Up Squad. DI Steel is a totally different prospect to deal with. She's abrasive, touchy, pushy and extremely unconventional. Logan's Number One priority is getting out of the Screw-Up Squad and the best way to do that seems to be a quick resolution to the increasing number of prostitute murders. Number Two priority is to try and keep his love life intact. Number Three priority is to keep avoiding journalist Colin Miller. Number Four priority is to survive another Internal Affairs investigation and keep from getting fired.

In the first book of the series, the weather was almost like another character, providing a great backdrop for the general miserableness of the crimes. In this book the summer setting, albeit slightly damp, provides a contrast for the crimes and the mood of the investigators in both Insch and Steel's teams.

DYING LIGHT is a solid, twisting police procedural with some short-lived sequences of quite graphic violence. This violence and the pitch perfect gallows humour that MacBride uses remind the reader that there is some real substance to the world being written about. The characters are very real. You feel like all of them would be instantly recognisable if you strolled in the Aberdeen nick, the local bar, the morgue or down the docks late at night.

Sometimes a second book, particularly one so close on the heels of such an impressive first novel can feel a little flat, or a little directionless. The trick of moving the focus on the DI's and their teams adds a freshness to the supporting characters and to Logan's personal interactions with his colleagues that really worked extremely well. After the sheer pleasure of reading DYING LIGHT you will be instantly left wondering where MacBride is going with the next one and very eager to find out. 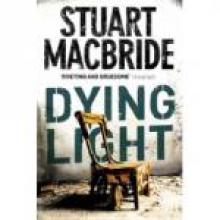 It's summertime in the Granite city: the sun is shining, the sky is blue, & people are dying. It starts with a prostitute, stripped naked & beaten to death down by the docks. Despite DS Logan MacRae's best efforts, it's not long before another body turns up on the slab.