Sometimes you just have to start off a book review with a bunch of warnings - so let's get the public service announcements out of the road now. Don't read DARK CITY BLUE if:

a) you're going to need sleep in the immediate future;
b) you're about to cough up the annual Christmas Policeman's Fund donation;
c) your tolerance for violence is more on the Midsummer end of the scale; or
d) you've got an allergy to adrenaline.

Ignore the warnings if you're looking for something that is action-packed, violent, sparse, and tense with a serious Australian sensibility. You're most definitely in the right territory.

The positives, are exactly the things right up the alley out the back of our place (okay so it's a gravel track but any analogy in a tight spot...). For a start, Preston is one of those authors who leave you pondering their relationship with their central character. Tom Bishop is a good-old fashioned honest cop, with no self-preservation instincts whatsoever. And apparently no pain receptors in his body and a stubbornly one-track mind. There's nothing particularly surprising about a hardboiled, noir sort of a cop that doesn't play nice with his superiors, and has a fractious relationship with his colleagues. What is interesting here is the level of corruption that Bishop starts kicking the covers from. It's pretty extreme - from armed robbery and sexual slavery to good old fashioned standover and more than a bit of general menacing and lurking. The idea that there is a high ranking officer controlling the network of corruption is very real, how high up this officer goes intriguing and what is really most of the mystery from the get go.

It's actually quite hard to tell who is on which side, and for how long for most of the book, and that, and the sheer lunacy of the action means that everything clips along at a tremendous pace. But it's not all hard, mad and bad. Bishop's tentative building of a relationship with his teenage daughter, until recently completely estranged from him, is a nice touch, giving the hard man a bit of a gooey core. It's also that relationship that provides some real moments of hope and sadness. There's also something disconcerting about aspects of the resolution that actually say quite a bit about motivation and why good people do bad things. I actually found that, in the middle of all of the mayhem, quite a thought provoker.

Whilst there is something vaguely cinematic about the action scenes in the book, it's not overdone or jarring, and DARK CITY BLUE mercifully doesn't read like a film script bashed into a book. In fact it reads like a hell of an action-packed, hard boiled, mean streets story, with a believable protagonist, tight and realistic dialogue and a plot that has a sobering credibility to it. 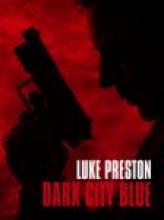 If there’s one thing worse than a crooked cop on your heels then it’s a whole unit of them.

A fistful of people are murdered, fifteen million dollars is stolen and detective Tom Bishop is stuck in the middle. When he hits the street, every clue points in the same direction – his colleagues in a police department demoralised by cutbacks and scandals. Hunted, alone and with no place left to turn, Bishop embarks on a hellish journey down into the gutters where right and wrong quickly become twisted and problems are solved with gunfire and bloodshed.

Over the next two days, Tom Bishop will be cornered. He will be beaten. He will bust into prison. He will shoot at police. He will team up with violent criminals. He will become one of them. He will break every rule in the book, chasing a lead nobody else will go near down a rabbit hole of corruption, murder and buried secrets.

Will Bishop become the very monster he set out to destroy?