I have never seen a single episode of any Survivor style reality TV program so the idea behind THE CONTEST is quite intriguing as a result - a sort of ultimate Survivor, where a dying man leaves his surplus fortune as the prize for a content held on his tropical island. Survivor come James Bond with a touch of Austin Powers built in?

The concept is a group of families / couples who go up against each other, arriving simultaneously on the island - building a life for themselves, literally from the ground up. The action of the novel switches around between each group, describing their arrival, and the various steps that they each take to ensure survival, and then, as pressure is ramped up and dangers start to manifest themselves, each group finds themselves coping in wildly different ways, with soberingly similar outcomes.

The idea is a great one, and there are points where THE CONTEST is a well-written, ripping yarn, but unfortunately the plot takes an long time to advance, with the focus switching around the group's, basically re-iterating the similar experiences and circumstances from a lot of different viewpoints. Because there is so much setup and work required to keep the plot and the intrigue in the air, character development does suffer, and ultimately, plausibility gets lost in the darkness. Hopefully the author is working on other things, as there's some great writing here, and the basic premise is a ripper of an idea. 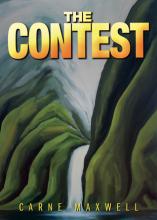 Martin Fallaway is dying. With no family to whom he can leave his surplus fortune, he holds a contest on his tropical island, where ten families compete to be the last team left in order to claim the prize of thirty million dollars.

Arriving on the island, the contestants’ need for shelter is paramount, but the warm, sunny days, powder-white sand and crystal clear waters cloak their perspectives. When a storm hits, causing the first departure, the remaining contestants realize their time on the island might not be as idyllic as they first thought.

As the days tick slowly by, hidden dangers begin to manifest themselves; insecurities creep in, personalities change, inquisitive minds take over and secrets become lies. Reckless decisions made change their lives forever and when the unthinkable happens and their very existence is threatened, the island becomes their darkest nightmare.

With time running out and the remaining contestants’ trust in one another challenged, can they bury their consciences and risk everything, or will the emotional sacrifice be too great?