COLD GRANITE is one of those debut books that come along and slowly cause a stir of comment and discussion in crime fiction forums. So much commentary just makes you want to get that book that everyone is talking about, but at the same time you often wonder if there's a chance that it's all noise and not much substance. COLD GRANITE is all substance.

On his first day back from extended medical leave, DS Logan just wants to get through his first day and hand responsibility back to his new DI. Despite needing to ease himself back into the job Logan finds himself investigating who is killing children. Just to add insult to injury the Chief Pathologist is his former girlfriend and her reception is just about as inviting as the Aberdeen weather in the middle of winter.

Getting himself back into the routine and back into the teams proves problematic for Logan. He's got to contend with a new DI who has an addiction to lollies, a problem with fools and a tendency to assume everyone is one. DI Steel is a well known womaniser who ends up with all sorts of political problems when a trial goes pear-shaped. WPC Watson is assigned as Logan's new babysitter, and she doesn't have the reputation of a ball-breaker for nothing. There's a new journalist in town and he's cocky and pushy. Somebody is leaking stories and Miller, the journalist, just can't seem to keep away from Logan. Children keep dying and disappearing and Internal Affairs seem to be very interested in Logan. All in all, things are not what Logan wanted or needed.

COLD GRANITE uses the weather almost as a character in its own right - it's used to enhance mood and atmosphere in a very engaging way. You feel the weather just as you feel the character's reactions and follow their desperate attempts to stop children dying.

Despite a difficult central subject, the murder of children, the author pulls off a light touch and a level of humour which isn't always just black and feels almost expected. This is a police procedural, but a good, varied story that uses the procedural elements as a framework and builds in details of the characters, their lives and their reactions in a manner that makes everyone human and many many of the people extremely likeable. There are sufficient sub-threads to add texture and realism to the environment and all of those sub-threads are finalised or pulled together elegantly at the end and there's no sense of rush to finish off the book. The language is sufficiently fluid and fluent to keep you engaged but the book does not smack of over-writing or the tendency of some first books to include all the ideas an author has ever had.

Add to that some clever twists and this is a pleasingly strong debut novel and one seriously good read. 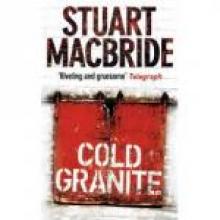 DS Logan McRae and the police in Aberdeen hunt a child killer who stalks the frozen streets. Winter in Aberdeen: murder, mayhem and terrible weather!

It's DS Logan McRae's first day back on the job after a year off on the sick, and it couldn't get much worse. Four-year-old David Reid's body is discovered in a ditch, strangled, mutilated and a long time dead. And he's only the first. There's a serial killer stalking the Granite City and the local media are baying for blood.

Soon the dead are piling up in the morgue almost as fast as the snow on the streets, and Logan knows time is running out. More children are going missing. More are going to die. And if Logan isn't careful, he could end up joining them!