I listened to this via Audible, largely because I was rather intrigued by the idea of the author as the narrator. Which overall was an interesting way to listen to a book, although I will admit, it did take a while to get used to the very dead-pan presentation style.

The book revolves around the world of Britain's SIS, and the Russia Department, concerned it seems mainly these days with the rise and rise of Russian oligarch's, this is less "spy thriller" than Le Carré's earlier works, with a strong emphasis on current day politics, but with little or limited evidence of modern day gadgetry - presumably to give this novel the sort of legs that his earlier, Smiley series attained so effortlessly.

Nat (pronounced more like Nate by Le Carré but spelt this way on the blurb) narrates his own story - a 47 year old veteran of Britain's SIS, he was an agent runner in the past, although these days he's fully expecting the final handshake at any moment. Back in London now, after many years on the move, he's re-establishing himself as husband to the long-suffering Prue, when he also finds himself taking over a department known as "The Haven", a defunct substation of London General, a backwater populated by a rag tag crew, aside from Florence - an agent runner who seems to have considerable potential. Right up until the time that she suddenly resigns and drops from view.

But I've moved forward a bit, Nat isn't just an agent runner, and now odd backwater chief, he's a passionate bandminton player - something he's used in the past as a way of covering up meeting agents.  When accosted at his club by Ed, a stranger who seems strangely desperate to beat Nat, a young man that Nat soon finds himself playing on a regular basis and coming to know a little - with his anti-Brexit / Trump, pro-German / EU stances quickly becoming apparent. Meanwhile Prue isn't just Nat's wife, she's a well-respected human rights lawyer, and somebody who is used to be married to someone for whom secrecy is a given. Even though their rebellious and slightly contemptuous daughter was never told what her frequently absent father actually does.

Given that Le Carré's past novels have always had a focus on the Cold War tensions, it was always interesting to see where he'd go when that particular thread unravelled slightly. Spies surplus to requirements, fringe dwellers to the whole new world of EU political influence spying is an intriguing idea, with the Americans and British supposedly working to undermine the EU whilst Brexit is still a theory, as opposed to the current day reality.

This plot gives Le Carré plenty of opportunity for some wonderfully cynical observations about politics, Brexit and the state of the world from a more left-leaning viewpoint (enough I suspect to make those of the opposing political persuasion furious). All of which, when delivered in Le Carré low key, dry, utterly without inflection style of narration, were disarmingly low-key until they aren't.

It's an unusual sort of thriller to be honest, possibly made more so because the narration is so low-key. The implications of what's being explored here are fascinating though, and definitely give the reader (listener) something to think about in terms of the way that politics has been so badly damaged by the sorts of clowns countries seem inclined to vote into highest office lately. Whilst it would be nice to think that the public service remains intact in the face of the buffoonery, everybody has their breaking point and it kind of feels like Nat's not the only one that's reaching his.

Having said that, AGENT RUNNING IN THE FIELD is crying out for a sequel, it ends with a thud as opposed to a crescendo. There's a lot of scope for some more prodding to go on here. 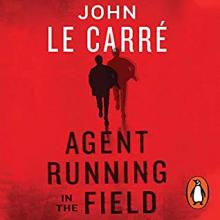 Nat, a 47-year-old veteran of Britain's Secret Intelligence Service, believes his years as an agent runner are over. He is back in London with his wife, the long-suffering Prue. But with the growing threat from Moscow Centre, the office has one more job for him. Nat is to take over The Haven, a defunct substation of London General with a rag-tag band of spies. The only bright light on the team is young Florence, who has her eye on Russia Department and a Ukrainian oligarch with a finger in the Russia pie.

Nat is not only a spy, he is a passionate badminton player. His regular Monday evening opponent is half his age: the introspective and solitary Ed. Ed hates Brexit, hates Trump and hates his job at some soulless media agency. And it is Ed, of all unlikely people, who will take Prue, Florence and Nat himself down the path of political anger that will ensnare them all.

Agent Running in the Field is a chilling portrait of our time, now heartbreaking, now darkly humorous, told to us with unflagging tension by the greatest chronicler of our age.