In 1973 in Fortitude Valley, Brisbane, the Whiskey Au Go Go nightclub was firebombed and 15 people died. In January 1974 Barbara McCulkin and her daughters Vicki and Leanne (aged 13 and 11 respectively) disappeared. It was not until 2017 that Vincent O'Dempsey, known amongst other things as the "Night Dragon" was found guilty along with an accomplice Garry Dubois, of their murder. Their bodies have never been found.

THE NIGHT DRAGON is the latest book from award-winning investigative journalist Matthew Condon, searching back over all those years for the events that led to, and maybe go some way to explaining, the death of the McCulkin's. It's tied up with many many years of criminal behaviour on the part of a group of men, starting out as boys forming gangs in and around Brisbane, suburbs and out towards Sydney.

A lot of the content of the book concentrates on the lead up to and the firebombing itself. Readers who are already aware of the connections between various criminals and dodgy characters, and the two people eventually found guilty of the bombing may feel that this is terrority already covered in other books, although anybody new to the story will discover just what a murky mess the whole situation had become. You might also be well aware of the results of the Fitzgerald Inquiry in Queensland into police corruption and integrity that has connections into the Whiskey Au Go Go killings as well.

Vincent O'Dempsey, however, for this Victorian was an unknown factor, especially as there are hints throughout this book that he could very well have killed a shocking number of people. And therein lay a tiny bit of disappointment about the book. Whilst aspects of O'Dempsey's activities were covered in THE NIGHT DRAGON, the focus seemed to be on the Whiskey Au Go Go fire. Whenever it veered more solidly into the behaviour of O'Dempsey and his involvement in the murder of the McCulkin's it started to reveal some information that was news. It started to reveal a bit about a man who sounds like he's been a thoroughly malicious and evil presence, and yet, somehow he managed to remain shadowy throughout this book. On the upside, it's an engaging telling, and there are aspects of the tie up and interconnections that are indeed sobering. Condon, as always, seems to have done extensive research, but his books never read as dry, or instructional. He gives life and humanity to the victims, and he does a terrific job at keeping track of the various crooks and their complicated interactions and relationships.

Barbara, Vicki and Leanne McCulkin deserve to be remembered, to have their story told, and to have it clearly understood that they were callously killed. The fact that it took over 40 years for their killers to be bought to justice is a testament to the people who eventually felt compelled to tell what they knew, and the persistence of the cops who followed up on their testimony. 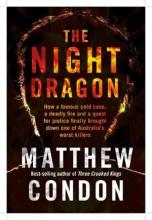 In 2017, Vincent O'Dempsey, along with his accomplice Garry Dubois, were sentenced to life in prison for the brutal murders of Barbara McCulkin and her two young daughters. It took over 40 years to bring them to justice. Feared for decades by criminals and police alike, Vincent O'Dempsey associated with convicted underworld figures behind major crimes such as the deadly Whiskey au Go Go nightclub firebombing and was also linked to a string of haunting cold cases.

Award-winning investigative journalist Matthew Condon has interviewed dozens of ex-cons, police and witnesses to put together a compelling picture of the calculating killer who spent his life evading the law before he was finally brought to justice. The Night Dragon shines a light on a chilling chapter of Australia's criminal past and the devastating legacy left in its wake.