Sometimes a man must take a step back to move forwards... and sometimes he just has to get up close and into a lot of faces. Either way James Bishop is exactly the sort of bloke you want to see looming up behind the disaster that life can sometimes turn out to be.

BACKTRACK is the second James Bishop book from Jason Dean, in, so far, two rather good, solid thriller books with a flawed but resilient central hero. Bishop, former marine, wrongfully accused prisoner, close protection bodyguard now disappearance expert manages to extricate a young woman from a nasty husband with suspect involvements, into a new identity and life with considerable aplomb. So he's not best pleased when it turns out that she's subsequently vanished. Bishop has a bit of history with obligations he messed up, and he isn't going to let that happen again. So he is determined to find Sonja Addison and how come there are other blonde, young women disappearing as well?

One of the most common things about a lot of thrillers of this kind, is that the central threat's got to be big and bold and just that bit out there. In this case whilst it might be a bit difficult to swallow the ultimate reason, there's something very convincing about the idea that women could just drop out of sight from disparate locations and backgrounds and have nobody make a connection, until a suspended female cop and an ex-marine with a tricky past accidentally fall over each other in the middle of their individual searches.

Of course it doesn't hurt in the acceptance stakes that Bishop is quite an interesting central protagonist. Far from perfect he's got enough of energiser bunny syndrome to be exciting and enough aches and pains to be plausible. It helps also that his sidekick in this adventure, Clarissa Vallejo, suspended cop, secret lover and particularly talented car driver is also a strong character who contributes, rather than stands around or causes complications.

This really is a great thriller series, with a central character who is definitely somebody you'd want on your side. Not the least because he's somebody who is not so good, so perfect, so invincible that you don't end up with a sneaking desire to barrack for the baddies once in a while. With a strong, capable and well-developed female sidekick in BACKTRACK, any slight wobbliness in the plot believability was a mere hiccup in what was, overall, a most enjoyable and fast-paced adventure. 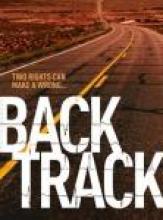 Sometimes a man must take a step back to move forwards...

In a small, sleepy Pennsylvania town, the staff of a loan store find themselves at the mercy of a gunman who demands they hand over the store's entire cash reserves. But when the sound of police sirens shatters the silence sooner than expected, the robber is forced to take a young female customer hostage in order to make his escape.

Former Marine James Bishop is no stranger to being on the wrong side of the law. Finally a free man, with his name cleared, he has the chance to get his life back on track. But as he flees the scene of the hold-up with his terrified hostage, he once again finds himself a wanted man...

Prison can change some people. But has it changed James Bishop?