Henry Hallward, editor of the Sydney Chronicle, is a thorn in the side of the colonial administration with his agitations for greater rights for convicts and his criticism of the governor. He's been imprisoned several times for criminal libel, and during one detention, he is shot dead.

Monsarrat and Mrs Mulrooney are sent to investigate, but after Monsarrat meets with Colonel Duchamp, Governor Darling's right-hand man, it becomes clear they are on their own in solving this murder.

As the duo meets other characters whose lives have touched that of brave Hallward, they realise the scope of their enquiries must be broad. There is Gerald Mobbs, editor of the Chronicle's rival newspaper, the Colonial Flyer, which some call a mouthpiece of the administration. There is Duchamp's sister, Henrietta, who seems to want to befriend Mrs Mulrooney, but also to have ulterior motives. There is Albert Bancroft, an �minence grisewho may, or may not, own the house opposite the gaol, from where the murderous shot was fired.

The undaunted pair must sift through these suspects, aware that at any moment Duchamp could ignominiously dismiss them, leaving Hallward's murder unsolved and the freedom of the colony's press in grave jeopardy.

Meg Keneally started her working life as a junior public affairs officer at the Australian Consulate-General in New York, before moving to Dublin to work as a sub-editor and freelance features writer. On returning to Australia, she joined the Daily Telegraph as a general news reporter, covering everything from courts to crime to animals' birthday parties at the zoo. She then joined Radio 2UE as a talkback radio producer. 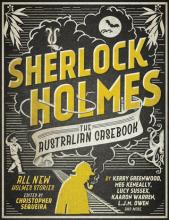 Thomas Michael Keneally, AO (born 7 October 1935) is an Australian novelist, playwright and author of non-fiction. He is best known for writing Schindler's Ark, the Booker Prize-winning novel of 1982, which was inspired by the efforts of Poldek Pfefferberg, a Holocaust survivor. The book would later be adapted to Steven Spielberg's Schindler's List (1993), which won the Academy Award for Best Picture. Often published under the name Tom Keneally in Australia.