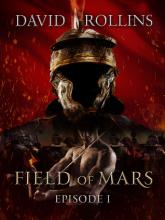 Marcus Licinius Crassus's lust for gold and glory was legendary. What became of his army is myth.

In Crassus the tyrant, Rufinius the soldier, Appius the historian, Mena the hag and Lucia the Golden Whore, David Rollins brings to life a mystery that has plagued historians for centuries. The only constant in this world is Mars, the god of war, and who he will favour is anyone's guess.

Desperate to write himself into the pages of history, proconsul Marcus Licinius Crassus marched 40,000 Roman legionaries into the heart of the Parthian empire. More than 10,000 were never seen or heard from again.

In a story that spans empires and generations, this vanished army's fate is finally unveiled. From the streets of Rome to the deserts of ancient Iran, around the globe into the heart of an empire vaster than anything Rome ever imagined, a young Alexandrian soldier is borne on the tides of the age of empires from soldier of Rome to slave of Babylon to commander of armies.