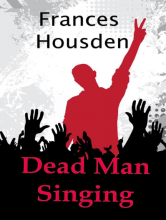 Could a rock-star's first big hit have predicted his death.

Landing the major murder case of rock star Jim Munro was everything ambitious Detective Joni Johns could ask for. Having little patience for a female running the investigation, the remaining band members of We Own the Night, hire private investigator Frankie Buchanan, a long-time fan of the rock group, to help solve the murder.

In a group of millionaire rockers, who stands to gain from Munro's death?

As the body count mounts, Frankie is forced to collaborate with Joni, the woman responsible for ending his police career. Racing against time Frankie and Joni need to uncover the dark secret, rock-star idol Munro, had kept from his band brothers all these years.

But will the truth come out too late?

Frances Housden lives in New Zealand, a beautiful country not so very different from Scotland, where she was born. She began her career as a published writer after winning Romance Writers of New Zealands prestigious Clendon Award. She went on to pen six very successful novels for Silhouette Books, where she merged her penchant for characterisation with her love of suspense. She is now delving into the world of historical romance, using her love of history to take her readers on an exciting trip into the lives of memorable characters.