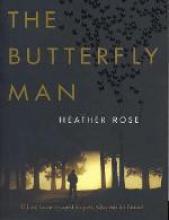 In November 1974 a young English nanny named Sandra Rivett was murdered in London's West End. Her employer, Lord Lucan, was named as her attacker. It was widely assumed he had mistaken her for his wife. Lord Lucan disappeared the night Sandra Rivett died and has never been seen since.

Henry Kennedy lives on a mountain on the other side of the world. He is not who he says he is. Is he a murderer or a man who can never clear his name? And is he the only one with something to hide?

Set in Tasmania, Africa and London's Belgravia, The Butterfly Man is an absorbing novel about transformation and deception.

Heather Rose was born on the remote island of Tasmania in 1964. Following a childhood spent mostly barefoot, or with a book in her hand, Heather travelled widely including several years in America's mid-west. Heather's first novel White Heart was published by Transworld in 1999. Her second novel, The Butterfly Man, is based upon the disappearance of Lord Lucan. Heather returned to Tasmania in 1996. She lives and works on the purple slopes of Mt Wellington with her husband, three children and a hundred mile view.