A Discworld take on crime fiction, THE TRUTH features William de Worde, Discworld's first investigative journalist. A job which came about more by accident than desire, but one that he turns out to be remarkedly good at. With assistance from his staff, and the unintentional help of some dark forces who stupidly try to plot the overthrow of Lord Vetinari.

When I was grabbing the blurb for this novel from Goodreads I noticed somebody had posted this quote:

The world belongs, however, to those who can look at the glass and say: What's up with this glass? Excuse me? Excuse me? This is my glass? I don't think so. My glass was full! And it was a bigger glass! Who's been pinching my beer?

And at the other end of the bar the world is full of the other type of person, who has a broken glass, or a glass that has been carelessly knocked over (usually by one of the people calling for a larger glass) or who had no glass at all, because he was at the back of the crowd and had failed to catch the barman's eye. ”

And therein you've got a feeling for the style, and the firmly tongue in cheek manner of observational commentary that inhabits the Discworld novels. THE TRUTH is the 25th novel in the entire series, and the 2nd in the sub-set referred to as "Industrial Revolution". It's funny (as always), it's clever (as always) and I do like William de Worde's character. And the entire supporting cast, although in this one the Guard plays a very small part, and even Vetinari, who is after all, being framed for all sorts of things in an effort to remove him, is somewhat shadowy. Of course, the villain(s) of the piece - Mr Pin and Mr Tulip are exactly the sort of Mr Wint and Mr Kidd character's you'd expect. 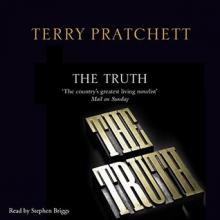 There's been a murder. Allegedly. William de Worde is the Discworld's first investigative journalist. He didn't mean to be - it was just an accident. But, as William fills his pages with reports of local club meetings and pictures of humorously shaped vegetables, dark forces high up in Ankh-Morpork's society are plotting to overthrow the city's ruler, Lord Vetinari.