Playwright, poet, and spy Christopher Marlowe is a man who doesn't much care about the consequences of anything that he does. He's dissolute, reckless and playing a dangerous game. London is a grimy, insular, frightened place – with the plague and war threatening, strangers are treated with great suspicion and the shadowy Privy Council run by Ministers who "cared enough for high office to profit from death".

The story begins in May 1593 when Marlowe is summoned from the home of his patron to appear before the Privy Council immediately. He is accused of being an atheist and recruiting others to his cause. His play Tamburlaine is known as an atheist tract and somebody calling themselves Tamburlaine is using references to the play in posters, bills and other materials scattered around London. So called friends of Marlowe have been quick to accuse. Marlowe must find the mysterious Tamburlaine and prove himself innocent, but, alas, history records that he was dead in a house in Deptford on the evening of the 30th May – 3 days later.

TAMBURLAINE MUST DIE is a fictitious account of the events that led from the charging of Marlowe to his death by stabbing. The known facts of the death of Marlowe are that he did die, stabbed in that house, lying on a bed. What is not so clear is the real truth of the events. As the author mentions in an addendum to the book, "The coroner's jury accepted the killer's claims of self-defence ... Marlowe's killer was awarded a pardon." "The flaws in the jury's decision have been well established ... The official account rests on the unreliable testimony of three rogues and is therefore unsafe."

Christopher Marlowe's fate is the subject of much ongoing debate worldwide, as is the ongoing conversation about whether he is or is not the true author of many of Shakespeare's works – and goodness knows this book (and this reviewer) are not stating an opinion one way or the other on that. TAMBURLAINE MUST DIE is Louise Welsh's fictional tale of the days leading up to Marlowe's death. The writing is deft, lyrical and very readable. The setting feels authentic, the characters beautifully grotesque, their actions startling, their sex lives varied to say the least. The book is very descriptive, almost picturesque even though there is very little charming or picturesque about 1500's London, the Privy Council's machinations or the life of a dissolute artist surviving by the kindness of patrons and friends. . 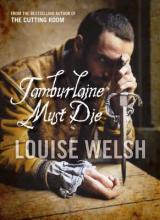 It's 1593 and London is a city on edge. Under threat from plague and war, it's a desperate place where strangers are unwelcome and severed heads grin from spikes on Tower Bridge. Playwright, poet and spy, Christopher Marlowe has three days to live. Three days in which he confronts dangerous government factions.