Set in Dunedin, New Zealand, local writer Jane Woodham obviously loves the place that she lives in. Incorporating a lot of local landmarks, geographical elements and a strong sense of place, TWISTER is her debut novel featuring DSS Leo Judd and a series of investigations into everything from animal torture to gay bashings, and the death of a young schoolgirl.

Starting out in an apocalyptic style, Dunedin is gripped initially by a flu epidemic, and then, after five days of biblical rain, an unusual twister rips through the place, causing havoc, and exposing the body of a missing schoolgirl in a local creek. DSS Judd is the lead investigator on the case, a difficult position for him to be in after the unsolved disappearance of his own daughter nine years earlier. He also isn't overly aware that his marriage is teetering on the edge, with his wife Kate contemplating leaving him to move in with her lover Rea.

TWISTER is extremely heavy on the personal elements, particularly the will she / won't she moving out of Kate. Rea is an old family friend, neighbour and somebody with who Kate shares a very big personal secret. She's much more forthright than Kate and applying hefty pressure for a decision to be made, and them both to be able to move on. This thread inserts itself into the investigative aspects of the book in such a hefty manner that it does frequently take over, although for those that are more interested in inter-personal relationships, and the pressures of coming out after many years of heterosexual relationships that might well be an interesting aspect. It could also result in an enormous amount of flicking, searching constantly for the crime threads, in what felt at times more like a romance novel.

Whilst the character of Kate is definitely a little on the wishy-washy side, that of DSS Leo Judd is stronger. They are both obviously still deeply affected by the disappearance of their daughter, but for Judd there's that professional disappointment as well as the personal loss. The fact that he's never been able to resolve what happened to his daughter gives this current investigation a little more of an edge, although again, that can sometimes be a little washed out by the real-estate conversations and the gardening, and the swimming and everything else.

Because of the byways, side-alleys and distractions liberally inserted into the action in TWISTER, this is definitely not a novel for those for whom plot and resolution are everything in their crime fiction reading. For anyone who is looking for something with all of those complications, with the emphasis on personal elements, and with such a strong sense of place, it would be well worth a look. 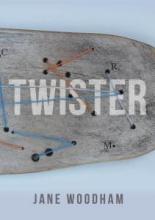 Dunedin, in the grip of an unseasonal flu, is a city under siege. Then, after five damaging days of rain, a twister rips through, exposing the body of a missing schoolgirl in Ross Creek.

Detective Senior Sergeant Leo Judd is the only one who can lead the investigation despite unresolved sorrow over the disappearance of his own daughter nine years earlier.

Sultry weather broods over the beleaguered city as suspects are sifted and pressure mounts for Leo to solve the crime. Meanwhile, his wife Kate tries to summon the courage to tell him the secrets she’s nursed for too long — including one about the disappearance of their beloved Beth.