There's something deliciously intriguing about the machinations in the plot of THE FOUNDATION. Not for one moment would you like to let the major media barons and the undue and partisan influence they wield off the hook, but the idea that they might also be subject to the same sort of games could make a reader feel there's a bit of comeuppance after all.

Steve P Vincent's debut thriller hits the ground running hard. His protagonist, journalist Jack Emery is worldly wise and as jaded and pissed off as you'd expect somebody with his background to be. Not so pissed off that he's going to let a shadowy Foundation and it's ruthless and vicious director get away with anything however.

Using many of the standard devices of a thriller protagonist - fearlessness and ruthlessness in particular - and putting them in the body of a non-military type is an interesting idea. Not that journalist can't be fit, capable and enduring, but it's a nice twist on the norm, especially as Emery doesn't pretend to be an all-action energiser bunny type. He's dogged, he's loyal, he's human and if you kick him it bloody hurts.

Setting him, and the intrigue that he's trying to uncover with good old-fashioned investigative journalism, in the world of international politics, which lets face it, isn't hard to believe as a melting pot of corruption, greed and power hungry lunacy, isn't going to do much for anybody's faith in those systems (if they still have any that is).

Which goes to show that THE FOUNDATION is very well crafted. It's a thriller sure, so it's high-pace, high-octane, high-risk action all the way. The scenario in which all that takes place however, is believable and chillingly realistic. It's also got some depth that can, unfortunately, sometimes be lacking in this style of book. There are reasons for the bad-guys doing what they are doing which might not be palatable, but it's certainly understandable.

An assured debut, THE FOUNDATION, is a really tightly plotted conspiracy novel that feels uncomfortably like it could very well be based on real-life. 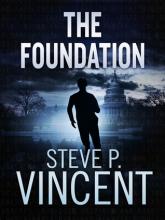 When a corrupt think tank, The Foundation for a New America, enlists a Taiwanese terrorist to bomb a World Trade Organization conference, the US and China are put on the path to war.

Star journalist Jack Emery is pulled into a story far more dangerous than he could have imagined. Because the Foundation's deputy director, the ruthless Michelle Dominique, recognizes that whoever controls the message controls the world. And she will take control, no matter the price.

Enter Jack's boss, Ernest McDowell, owner and chairman of the largest media empire on the planet. In the midst of political upheaval, EMCorp is about to become the final play in the Foundation's plan. When Dominique traps the EMCorp owner in her web, Jack's the only one left to expose the conspiracy before it's too late.

As the world powers smash each other against the anvil of Taiwan, Jack will risk everything to battle the Foundation and prevent them from taking control amid the devastation of a global war.