NO LOVELIER death is the ninth and latest entrant in the DI Faraday series of novels from Portsmouth based author Graham Hurley.  If you're a fan of British Police Procedurals, then chances are you already know about these books - if not, you're in for a treat.

NO LOVELIER DEATH starts out with an issue that many urban dwellers are all too aware of these days.  A teenage party, advertised on a social networking site, is overrun and quickly gets out of control.  This party is being held by the daughter of a tough local judge, in the leafy and exclusive location of Craneswater.  Not too exclusive mind you, local crime boss, Barry MacKenzie, lives next door and he's less than impressed when he and his wife return home from a dinner party to absolute chaos.  Bazza's particularly put out as he'd promised his neighbour he'd keep an eye on things whilst the judge was on holidays, but he quickly finds there's s no respect these days when he scores a bit of a hiding trying to break up the party.  Worse is yet to come when Bazza's wife finds the judge's daughter, Rachel and her boyfriend, dead beside the MacKenzie's pool.

The police have an absolute nightmare on their hands - as a house full of rioting, drunken, out of control teenagers, become potential suspects or witnesses that have to be processed.  Bazza's also not a man to take an affront to his stewardship lying down, and having ex DC Paul Winter on staff means that he can run his own investigation.  Soon Winter and Faraday are on similar ground, each trying to identify the killer from the midst of the carnage.  The difference in effectiveness comes down to who has the most contacts and influence - the police or Bazza MacKenzie.

This direct comparison - Faraday and Winter on different sides - is particularly interesting.  Winter was a rising star in the police until events conspired to push him into working for MacKenzie.  Earlier books cover these events, although revelations dropped into NO LOVELIER DEATH explain much of what has occurred.  A new reader to the series is going to be able to catch on, is even going to be a little ahead of the game if they start with this book.  Both are interesting men in their own right.  Faraday is a little standoffish, keeps himself to his family more than his colleagues, an obsessive bird watcher, father to a profoundly deaf young man, he's not overly angst-ridden, rumpled or "difficult", differences commented on by other characters in the book.   Winter's a similar personality in many ways, although more of a loner, capable, loyal, fundamentally a good bloke, he's in a difficult position.  Loyal to Bazza as Bazza has been loyal (in his own way) to him, Winter's is forced to come to grips with the reality of working for a gangster.

Alongside the good characterisations (and a very dark but fascinating sense of the setting in Portsmouth), there's a very good plot working through NO LOVELIER DEATH. It covers a lot of ground - the growing instances of "organised" party gatecrashing; the nature and psychology of a society that seems to have lost touch with itself; obligation and debt; pride and revenge.  NO LOVELIER DEATH does switch a fair amount of the focus from Faraday to Winter, establishing very clearly Winter's change in circumstances.  Along the way it uses a number of different lines of enquiry, and the peripheral involvement of Faraday's partner and his son, giving a range of possible solutions from which the reader can draw some interesting conclusions.

The Faraday and Winter book (as now billed) really are excellent examples of the British Police Procedural.  The added twist of two experienced police investigators working the different sides of the law bodes well for where they'll go in the next book. 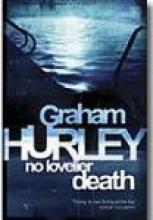 While Crown Court Judge Peter Ault is away on holiday with his wife, his teenage daughter Rachel throws a party.  The invite goes out on Facebook and before she knows it over a hundred kids from all over Portsmouth have descended on the house in the leafy affluence of Craneswater.  The party turns into a riot and the property is trashed.