Listening to the audio book of NIGHT WATCH by Terry Pratchett, I couldn't help but wonder if Sir Samuel Vimes had done something to annoy his creator. He's happily married, awaiting the very imminent birth of his first child with his formidable wife Lady Sybil, when a short chase of an utterly unrepentant criminal and murderer sees a stray lightening bolt hurtling him back in time to when he was young. All of a sudden he's very much on his own, despite the presence of a few people who come to know Sir Samuel much better by the end of this book. He's single-handedly leading the fight against inept and frankly dumb city leadership, all the while watching his young self be... young; trying to work out how to get back to the present day and his wife before its too late.

A bit of a star-turn for Sir Samuel, he's really on his own in this earlier timeline, mostly because he knows about the timeshift and the future, so it's great to see his resourcefulness and cleverness on full display. It's also mightily odd to think he's guiding his younger self in a very hands on manner, all the while acutely aware that he can't fiddle with past events too much, because goodness knows what that will do to the present day, somewhere he really keenly wants to get back to. Intact.

Cleverly done, with elements of a crime thriller thrown in for good measure, it was really enjoyable listen, that did require a hefty dose of concentration as past and present sort of mashed together, and people and circumstances fell into place. 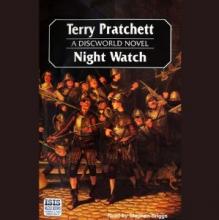 Commander Sam Vimes of the Ankh-Morpork City Watch had it all. But now he's back in his own rough, tough past without even the clothes he was standing up in when the lightning struck.

Living in the past is hard. Dying in the past is incredibly easy. But he must survive; he has a job to do. He must track down a murderer, teach his young self to be a good copper, and change the outcome of a bloody rebellion. There's a problem: if he wins, he's got no wife, no child, no future.

This is a Discworld Tale of One City, with a full chorus of street urchins, rebels secret policemen, and other children of the revolution.