Reading NATURAL HISTORY I was struck by a number of things.  Firstly, this is not your normal family.  It's mostly Jane's idea to take over Monkeyland and build it into a good animal sanctuary - saving it from undoubted bankruptcy.  Patrick just sort of goes along with this.  It's Jane's idea to do the television series about Monkeyland.  Patrick sort of goes along with this.  Jane's the one that heads off to Africa and more TV stardom.  Patrick goes along with this.  Patrick's the one that ends up running Monkeyland - half-heartedly you'd have to say.  Patrick's the one that tries to keep hearth and home together as Jane deals with her own demons in Zaire.  Secondly, their children mirror the parents, but there's the sex crossover.  Jo's pretty amenable, she's got her love of Astronomy and now she's home, rather than at boarding school she's just about prepared to roll along with most things.  Charlie, on the other hand, is a bit more volatile.  He works actively at Monkeyland and he has a real bond with the animals.  When he has to be dismissed after an altercation with a patron chucking things at some of the apes, then he gets a job at a big, seaside hotel.  And he works hard at the job.  He's getting on with things.  Thirdly, there are all these cross-over threads.  Patrick's worried that Jane's having an affair with her TV producer, Charlie is having an affair with a woman he meets one night in the hotel.  Jo's busy studying with her tutor and Patrick... well Patrick's obsessed with a panther.  One morning he's sure he's seen a big black panther, stalking the back lanes of leafy England.    Finally, it sounds like there's a lot happening in NATURAL HISTORY, and there is, but there's also not a lot happening.  In the early part of the book there's Rue, the elderly ape's murder, but in terms of other crimes, there's nothing else much.  For most of the book.  But there is this never-ending sense of tension.  Maybe it's the reader wondering what / if anything is ever going to happen, but whatever it is, the book moves rapidly - somewhere.

It could be that the writer's background as a TV writer shows strongly here, the story is told in short sections from a number of different perspectives.  It swaps, changes, wrong-foots, heads down multiple side alleys and slowly, but surely, feels like it's going somewhere but you don't know where.  In the first few chapters I was honestly wondering if anything was ever going to happen and thought I was getting impatient.  It was only 3/4's of the way through the book that I realised that there was still a lot of what seemed to be nothing happening, and yet, I didn't want to put it down.

Definitely not a book for lovers of the "body in the opening" pages style, NATURAL HISTORY just crept up on me. 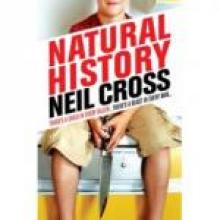 Strange things are happening in Monkeyland, the ailing Devonshire sanctuary that Patrick and his zoologist wife Jane, bought in a bid to save their marriage.

Rue, their oldest, wisest and most gentle female primae is found murdered.  And a big, panther-like cat preys around the park.  Evading capture, the cat lurks in the shadows and at the back of Patrick's mind.  Private, threatening, elusive.

Patrick's son Charlie has left Monkeyland in disgrace, his wife is on a field trip in war-torn Zaire and his daughter Jo is avidly tracking progress of the comet Hale Bopp with her tutor.  Patrick is left alone with his black cat and his fears.  Until one night something happens that is so shocking, so deplorable and so destructive that it rips apart everything Patrick has ever held to be true.