One of my current audio quests is to go back to the beginning of the Inspector Maigret series and work my way through. THE LATE MONSIEUR GALLET is the third book in the series, so it was particularly interesting to note how firmly the characteristics of Maigret are established already. His tendency for reflection and observation, and his dogged determination are all on display as he works to solve the baffling case of the travelling salesman with a mystery in his background.

That Monsieur Gallet's death came as a shock to his family, and the people of the small town where his body was found, goes without saying. The postcard, sent after he supposedly died, to his wife is not easily explained, as is the location in which he was found, and it turns out, his background as a travelling salesman, and his reputation as a fine, upstanding family man.

Old-fashioned in approach (this was originally published in 1931), Maigret's style of investigation relies on following a victim's pathway in life. He accumulates stories and clues, talking to witnesses, people in the various locations he finds himself, drawing out a timeline, and the facts as he goes. He's one of the "lateral thinking" detectives of that era - relying on a cerebral, rather than physical approach, although he's not above sending colleagues running if deemed necessary.

The reflective nature of the character is perfectly echoed in the narration style - which is gentle, almost mesmeric at times, meaning that the sense of Maigret assessing the consequences of solving the crime is gently delivered and somehow more pointed as a result. He's aware that the repercussions will affect more than the murderer this time around, and his consideration for others is low-key, somewhat formal and stiff, just as you'd expect from a character like him, and all the more touching because of it. 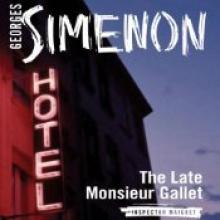 Instead of the detail filling itself in and becoming clearer, it seemed to escape him. The face of the man in the ill-fitting coat just misted up so that it hardly looked human. In theory this mental portrait was good enough, but now it was replaced by fleeting images which should have added up to one and the same man but which refused to get themselves into focus.

The circumstances of Monsieur Gallet's death all seem fake: the name the deceased was travelling under and his presumed profession, and more worryingly, his family's grief. Their haughtiness seems to hide ambiguous feelings about the hapless man. In this haunting story, Maigret discovers the appalling truth and the real crime hidden behind the surface of lies.