The 4th in the City Watch subset of the Discword series, JINGO, is about the daftness of war, with some timely observations about racism on the side. Whilst it's mainly a City Watch novel, so Sir Samuel Vimes, Carrot, and the whole team are front and centre, there's also a more hands on appearance from Lord Vetinari than in earlier novels.

Cleverly done as usual, a new land has surfaced, giving rise to old feuds and tensions. As two armies take to their feet, Sam Vimes has got a mere few hours to marshall his small band of crime fighter's against the biggest crime there is - war. Surrounded by people out to get him, frequently the ones supposed to be on his side, Lord Vetinari has marshalled his own band of a clever inventor and comes swimming into the fray in his own right.

As always, funny and clever, packed with clever references, populated by wonderful characters, taking a little time out on the side to skewer the worst of human behaviour, this 21st Discworld novel was another most enjoyable listen, narrated by Nigel Planer. 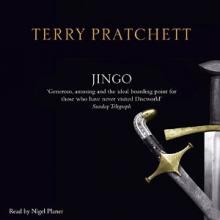 A weathercock has risen from the sea of Discworld, and suddenly you can tell which way the wind is blowing.

A new land has surfaced, and so have old feuds. And as two armies march, Commander Vimes of Ankh-Morpork City Watch has got just a few hours to deal with a crime so big that there's no law against it. It's called "war".

He's facing unpleasant foes that are out to get him...and that's just the people on his side.

The world's cleverest inventor and its most devious politician are on their way to the battlefield with a little package that's guaranteed to stop a battle...