ILL-GOTTEN GAINS is the second Nell Forest Mystery by Ilsa Evans set in the imagined country town of Majic (somewhere out near Bendigo if I remember from the first book :) )

When reviewing the earlier book, NEFARIOUS DOINGS recently, I commented on the style of accidental female PI series that these books fall into and what a good example of that genre they are. Whilst the first book was, in itself, a fun example of that style, ILL-GOTTEN GAINS adds a much stronger plot to other strong elements.

Part of what makes these books work so well is the central character - Nell. She's an accidental investigator. A bit of a sticky beak that gets herself into the middle of any questionable goings on. Either by just being in the vicinity or because she actively seeks out involvement. When her youngest daughter uncovers a mystery about the founding father of the town, right on the eve of the 150th Anniversary celebrations, of course Nell's going to get involved. There's lots of strong twists and turns in the reveal of that story that will keep the reader guessing up until the end.

The supporting cast from the first book is back with various daughters, local cops, sister, mother and local entities all there. There's also a stronger part for the ex-husband and his new girlfriend and a lot of fleshing out of the relationships between everyone. There's the will / they won't they romance element which whilst expected in this style of book, is nicely done - with humour and a strong feeling of new attraction tempered with the reality of slightly advanced years.

Humour, mystery, family relationships and small town complications all get their moments in ILL-GOTTEN GAINS. I suspect you'd be able to read these books out of sync, but they would work better if you can start with the first. But if your a fan of this sort of lighter style, then you really should try both of these books. 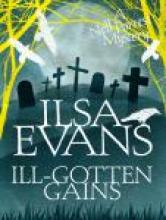 There are secrets in the sleepy town of Majic, where the past trips over the present ... and then looks the other way.

The country town of Majic is about to celebrate a milestone. It's been 150 years since the founding father, Petar Majic, rode into the bush after a liquid lunch, vowing to build a house at whatever spot he reached by sunset. However, what happened next isn't quite what town legend would have you believe.

A minor act of cemetery vandalism lands local columnist and amateur detective Nell Forrest right in the path of historical inevitability. An apparent murder-suicide leads to the unveiling of a century-old scandal and a trail left by a trio of long-dead women.

Nell's investigations are hampered both by the arrival of the handsome district detective and by her family – whose dramas almost eclipse that of the town itself. With directionless daughters, unplanned pregnancies, a spot or two of adultery and an ex-husband who wants her house, Nell barely has time for the case, let alone the energy to keep her wits about her at the same time.

And Nell will need her wits about her as the mystery of Majic begins casting its shadow into the present day, putting Nell and her family in grave danger. In the end, Nell must decide whether it is a tale of epic fortitude, or treachery and ill-gotten gains, before the past catches up with her.