It was rather pleasing to see DUBLIN DEAD, mostly because O'Donovan's first book, The Priest, actually managed to get me to rethink my "over serial killer" books stance.  So no pressure on this one... at all.

There is some reference back to The Priest in DUBLIN DEAD, which is unavoidable really given that both books feature journalist Siobhan Fallon and policeman DI Mike Mulcahy.  If you've not read the earlier book, that shouldn't put you off completely, as there is some recapping of what happened, particularly to Siobhan.  Whilst it should be enough to allow new readers to not get lost, and returning readers to avoid rehashing old events, the scope of the tentative friendship / attraction between Fallon and Mulcahy could be a little less clear.  That's probably the only flaw in the rationale of the book - whilst it's not unknown for journalists and policemen to co-operate for expediency's sake, the level of connection between these two could be confusing without knowing how the working relationship got started.

What is substantially different in DUBLIN DEAD is the nature of this plot - which is multi-threaded and based around gangsters, drug dealing, an inexplicable suicide, an armed hitman and a missing woman.  Obviously in this sort of book, you'd be perfectly entitled to assume that these threads are going to end up somehow connected, but even allowing for that expectation I must admit I did not see how or where O'Donovan was going to be able to do that.  Especially as the book does take a while to get going, so a lot needed to happen in a hurry to tie off the events.  The earlier part of the book is spent teasing out the various connections, Fallon and Mulcahy both coming to the centre from a range of different threads.  As in the first book, there is another Spanish / Irish connection ... this time because an Irish gangster dies in Spain, at the same time that Irish police are looking into a massive drugs haul on a yacht off the coast of Cork.  There's obviously something in these connections that the author likes, or maybe it's more common in Ireland and Spain than we know about in this corner of the world!

One of the most interesting aspects of DUBLIN DEAD for me anyway, was the comparisons with the earlier book.  The switch from the enclosed, creepy serial killer storyline to drugs, gangsters, hitmen and violent murder gave the author a nicely complicated plot to pull together.  Compared to that very personal feeling of threat of the earlier storyline, DUBLIN DEAD had a wider scope, a greater capacity for a true thriller style chase, and somehow a threat that seemed less personal and more professional, a hitman, after all, just doing a job.  That change in focus also meant that there seems to have been a subtle change in the author's viewpoint.  The two main characters - Fallon and Mulcahy are under pressure undoubtedly, but somehow because the threat was more professional (measured / deliberate) which seemed less personal (unpredictable / mad / off kilter), it seems that there was an opportunity for a bit more exploration of personal vulnerability and frailty.

I remember thinking after The Priest that these two could make a very interesting duo into the future, and DUBLIN DEAD is still encouraging that feeling.  Whilst I really enjoyed the first book, I found DUBLIN DEAD to be even better, so now I'm hoping for not just a third book, but a fourth and maybe more in the Fallon and Mulcahy series. 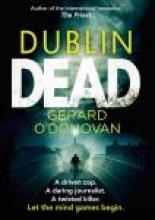 One year on, DI Mike Mulcahy is exactly where he wants to be, co-ordinating international intelligence for the Garda National Drugs Unit. With Ireland in economic turmoil, he reckons solving the mystery of how a €100 million shipment of cocaine came to be abandoned off the south coast might save his team from the harsh government cutbacks

Reporter Siobhan Fallon is recovering from her ordeal in The Priest. Struggling to re-establish herself on the Sunday Herald news desk, she’s an emotional basket case but her nose for a story is sharp as ever. When a suicide turns out to have a bizarre missing-persons’ angle, she’s convinced there is something darker to it. But with a vital piece of evidence beyond her grasp, she must turn to Mulcahy for help.

Neither of them anticipates what deadly ground they’re setting out on, or that their journey will lead them on a trail of terror to the wilds of West Cork and a blood-drenched showdown with a remorseless killer...