If there's one thing that DARK CITY reminds the reader of - it's that it doesn't matter what is happening around us, there are always the good, the bad and the downright opportunistic members of the human race.

There's always been stories of the strength and determination of the British people during the Blitz and the Second World War in general - their stoicism, the way that they pulled together and survived the dreadful bombardments throw at them in the course of the war.  But I don't remember that much concentration on the lesser elements of society.  The murderers that used the elements of the blitz to their own ends - the blackouts, the deprivations, the sheer distraction of the people as a whole.  There were also the murderers that simply could not help themselves, that kill regardless of the circumstances or the time.

DARK CITY is an interesting book that combines a look at a series of murders with some observation of the time in which they occurred.  Interestingly there is also a family connection for the author, his grandfather was the arresting officer in one of the murders discussed by the book.

Covering a wide range of murder types - serial and opportunistic, from the lesser known to the notorious such as the Rillington Place Murderer, John Christie, DARK CITY gives the reader a different viewpoint of London during the Blitz.

Interestingly, whilst the idea that there were crooks and murderers within a society that was so threatened by external threats is sobering, the overwhelming message that comes from the book is that no matter how constrained by external factors, how limited the scientific options available, there remained an overwhelming desire to investigate, resolve and find justice for the victims. 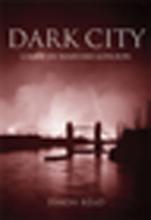 There was more to wartime London than stiff upper-lips and rousing choruses of ‘Roll out the Barrel’. There was crime and plenty of it in the time of Blackouts, Blitz and Bloodshed, and it is chronicled here in this lively and accessible history . . .

Criminals hunted their prey without fear of reprisal. Many operated under the cover of darkness, emerging when the city sank into the oblivion of its nightly blackout; others simply struck whenever opportunity presented itself. At a time when Londoners were pulling together in the face of terrible adversity, there were an increasing number of looters, racketeers, terrorists, criminal gangs, prostitutes, rapists and murderers stalking the bomb-ravaged, panic-ridden streets, and this book chronicles the rapid rise of crime throughout this turbulent period.