J R Carroll writes a really lively combination of gangster thriller crime fiction. Set in and around Melbourne there have been a few books which are a series - using the same characters and a lot that are standalone.

CHEATERS is one of the standalones thus far, or at least, this is the first / only time I've come across these characters and I've read a lot of J R Carroll's books.

CHEATERS is set, I think, sometime in the early 1990's - or at least in Melbourne when the temporary casino was in operation before the monolithic, vaguely prison like Crown Casino complex was opened.

The story has a number of threads to it, but there are three unlikely heros:

Mischa is a model, working for Sigmund Barry. She rides a motorbike, she's unbelievably gorgeous and she's very quickly and very much in love with young Danny. There's more to Mischa than Danny knows about.

Robert Curlewis had the world at his feet as quite a mover in Melbourne University academic circles. Unfortunately alongside his popularity in those circles came booze and heroin and he succumbed to both, commencing a rapid decline into the dregs of society. When he inherits another desperate person - Florence - and she witnesses a vicious slaying in Melbourne's Chinatown, Robert finds himself dragged even further into Melbourne's underbelly.

CHEATERS has a lot of different things happening all at once. It takes quite a while to pull all of those elements into the story and therefore the book seems to take a while to get moving. It then does get very bogged down in sexual athletics at points, which for some reason don't work quite as well in CHEATERS as they have in other books by the same author - frankly, they get all a bit boring after a while. Luckily, J R Carroll pulls his characters out of all of that and once the various threads start to converge the rollercoaster thriller style kicks in and the ending is typically explosive.

As I've said before, I don't read these books because of the great insight into the human condition. I read them because they are a bit of fun. 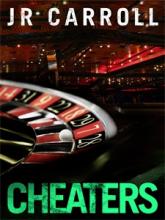