BLACKWATER MOON is the second book from Australian author B. Michael Radburn, although this has more of a crime fiction / thriller focus. Atmospheric, emotional, poignant and tightly controlled, both books from Radburn mark him out as an author to be watched.

The story is built around Andy Walker, a young boy, in a small Australian country town who starts out in life with challenges. An alcoholic and abusive father, a mother who eventually throws in the towel and takes up drinking to kill the pain, Walker is lucky enough to meet a man who teaches him to row, who acts as a mentor. Alas, another adult that Andy meets on his journey is another damaged human being, a man all too willing to give in to his own demons.

This is not the first book I've read recently that uses a small town / young boy / war intervention theme, although it is set more recently, and the war involved is the Vietnam conflict. Both these books have, at their core, a strong sense of loss, of struggle, and of the potential outcome of background and circumstance. BLACKWATER MOON also includes that idea of a mentor, of the one person that can step into a young boy's life and make a difference which adds a level of hope, the possibility of a positive in a life which is set reeling by the actions of others. Then there's the character of Andy Walker. A young boy from a difficult background, in danger of being shaped by a dreadful experience, beaten down again and again by events, timing and things outside his control - Walker struggles to build a life. But there's more to the book than that, the story is also looking into the eyes and mind of a damaged man. A man who acted with impunity, seemingly unseen by a small community, a man who has made starkly different choices.

The tension in BLACKWATER MOON is multi-level - an external threat, the "Game" and its perpetrator, the internal threat of what life has done to Andy Walker. There's some fascinating observations of what it must be to be a victim, to succumb to the terror, or find a way to deal with it, go on, live a life.

Needless to say, BLACKWATER MOON is clever. It's sad, uplifting, poignant, worrying, touching and provides more than a little insight into life, love and the whole damn thing. Sure the ending is a bit sentimental, but by that stage the characters and the reader have been in the wars. A bit of schmaltz is exactly what a lot of readers are going to need by then. 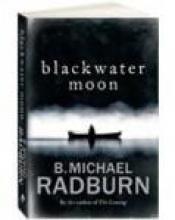 Andy Walker, son, lover and an ex-soldier, knows tragedy is only ever a heartbeat away.

When an inmate escapes from the prison farm upriver and abducts Nathan, a child Andy has vowed to protect after losing his own son years before, Andy Walker discovers that the escapee is a dark figure from his past, the devil who changed his life, the man who introduced him to 'The Game'.