“Walking back through the littered streets to his flat a few minutes later, the temperature dipping fast, Nate tried to stack his thoughts. To weigh up what he was doing, what he was potentially being pushed into. Jen was crazy, of course she was…”

Fahrenheit Press is an independent crime fiction publisher based in the United Kingdom. Apart from traditional crime fiction they also publish hard-boiled noir and experimental crime fiction under the banner of Fahrenheit 13. Paul Gadsby’s Back Door To Hellis published by Fahrenheit 13 and the story of boy meets girl, boy is convinced by the girl to take part in a robbery, all does not go to plan and boy and girl go on the run seems on the surface to be a familiar one, there are however many more layers to this excellent noir novel.

Back Door To Hell begins at the middle, the robbery which doesn’t quite go to plan and then goes back to where it started with Nate and Jen’s first meeting at the pool hall owned by London crime boss Crawford. Jen is working at the pool hall when Nate arrives to pay off a debt he owes to Crawford, a payment which involves working at the pool hall for free for a month. Neither Nate or Jen come from a privileged background and they’re stuck in the tight little box which life has placed them in. Crawford on the other hand controls the illegal activity for a large part of London and appears to have it all. This is not the case as he has a problem which neither money nor threats of violence, his standard tools of trade, can solve. When Nate and Jen make off with a large sum of his money he’s presented with a problem he can solve, he also needs to do it in a hurry; the chase is on.

It’s this part of the novel where Back Door To Hell really stands out. Although violence or even just implied threats of violence are never too far away in a noir novel, it’s the fine observations of human behaviour or noted omissions in a conversation which give Crawford a far greater chance of capturing the runaway pair than the aforementioned violence. The interaction between Nate and Jess also changes at this point because to escape they not only need to trust each other, they must also decide who else to trust if they are to survive. I highly recommend reading Back Door To Hell to find out if they do. 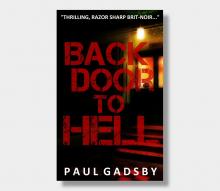 Boy meets girl. Girl has a plan. A plan that’ll change everything.
Nate and Jen are two working class kids looking for a chance to leave behind their dreary, minimum wage lives forever.
Jen has figured out a way to change everything, she just needs a little help to pull it off. That’s where Nate comes in.
She’s got it all planned. In and out before anyone notices, nobody gets hurt and finally they can start living the lives they always imagined. A simple heist, even for amateurs like them.
The problem is local crime lord Crawford is not an amateur. Not by a long chalk. Jen & Nate have stolen his money and more importantly they’ve damaged his reputation. He intends to get both back. No matter what the cost.