THIRTY-THREE TEETH is the follow up to THE CORONER'S LUNCH featuring the elderly, reluctant Laotian National Coroner Dr Siri Paiboun.

In THIRTY-THREE TEETH it is summer in Vientiane and it is hot, bloody hot. Laotians greet each other with that phrase as they steam away in the unrelenting heat. In Vientiane, a much tormented Asian Bear escapes from cruel confines in a local hotel garden just before there is a slow build-up of viciously savaged corpses in Dr Siri's morgue. The injuries that these victims have endured appear to indicate that they have been mauled by a very large animal, but Dr Siri is pulled away from that investigation by the authorities who demand he flies immediately to the north of the country to examine two badly charred bodies. In the meantime there has been another very mysterious death at a local government building and there's a chest in the National Archives that still has to be opened.

Whilst Dr Siri is spending time in the north, Nurse Dtui goes snooping using some very ingenious casts of the mauling victim wounds to try to understand what creature could be causing these sorts of injuries. In the North, Dr Siri has got problems of his own. He's always been psychic and he frequently chats to the dead, but in the North he's surrounded by the living, the spirits, the dead, shamans, Laotian Royalty, Communist hierarchy and his own in-laws. Knowing what caused the death of the two charred victims is one thing. Getting back to Vientiane, getting that chest in the Archives open, sorting out the fate of the poor bear and stopping the mauling deaths is another thing. Equally importantly there are the more domestic problems of that blasting loudspeaker at the end of the road and watching his new Shaman friend romance his dreaded next door neighbour.

THIRTY-THREE TEETH is a little more confrontational than THE CORONER'S LUNCH from two major aspects. Firstly there are a number of animal characters in this book that have a higher profile and there is cruelty described in broad detail which could be disconcerting for some readers. There is also a much higher level of the mystical in this book than in the first, which again might worry some readers. Both of these aspects fit seamlessly in the cultural context of the book, and there is a nice touch of revenge and restitution which helps lessen any reader discomfort. It would be a pity to dodge an outing with the marvellous Dr Siri and his indomitable assistant Nurse Dtui because of them. The mystical in THIRTY-THREE TEETH has the added bonus of delivering a new side character in the magnificent shaman Inthanet whose role in the unveiling of the contents of the chest are only a small part of his overall impact on the various storylines.

Ultimately THIRTY-THREE TEETH is a good mystery with a lot of solid threads running through it, peopled by some fabulous characters, deftly drawn. It is delivered in what seems, to a complete outsider, a very Laotian style - celebrating the cultural uniqueness, whilst also pointing out the differences and difficulties that the people are managing within. 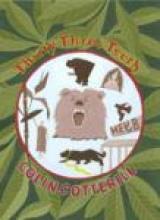 The once retired Siri Paiboun - now national coroner, confused psychic and disheartened communist - decamps from the steamy capital and heads north to examine two badly charred bodies.  Siri's a busy man, dining with the deposed king, attending a shamans' conference and being rescued by the ghost of an elephant.

Meanwhile, back at Vientiane headquarters, savaged corpses start to pile up.  Could it be the missing bear from the circus, or is it a weretiger?  Siri's trusty assistant Nurse Dtui goes snooping bug, unlike her boss, the spirits aren't looking out for her... And just what creature, if any, has thirty-three teeth?