Books like THE GOOD NURSE aren't really designed to give you a warm and fuzzy feeling about any health service. Particularly one that seems to be motivated by profit and avoidance of lawsuits, programmed to just move a problem on, and avoid looking too hard at anything that might be slightly amiss.

This is really a chilling story, looking closely at the career (nursing and killing) of registered nurse Charlie Cullen. Particularly chilling as there was nothing merciful or even understandable about the killing spree that led Cullen to kill patients. Randomly choosing his victims, even hands off killing by injecting drugs into random, unallocated IV bags, Cullen's motivation for his actions seem to be wrapped up in his own severe psychological problems. Unfortunately Cullen himself isn't particularly forthcoming about his childhood or his background so there are points at which the narrative is at a loss, the author is at a loss, everyone is at a loss to explain why this man did what he did.

What's even less able to be explained is a medical system that refused to see what was happening. Either wilfully or stupidly, the reader is left speechless by the seemingly incomprehensible reaction of authorities, particularly once a couple of very dedicated policemen get onto his trail, and a dedicated and caring colleague steps up to assist the investigation.

To be brutally frank, whilst what Cullen was doing is horrifying, what was even more horrifying were the actions of the hospital administrators, lawyers and management who worked overtime at cover up. Their actions were criminal, and whilst it's some relief to know that some families were able to take legal action, there's absolutely no excuse, no justification, no reason on this earth that any of them should not have been hauled to account by authorities.

A GOOD NURSE is a really uncomfortable read as it's definitely truth being considerably more frightening than fiction. Whilst Cullen was ultimately convicted of a very minor number of the deaths for which he is responsible, and there is some feel good factor in the way that some dedicated policework and ethical behaviour from a single nurse prevailed, the rest of the system comes out looking underwhelming to say the least. 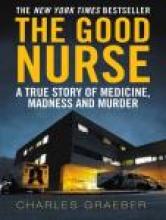 After his December 2003 arrest, registered nurse Charlie Cullen was quickly dubbed “The Angel of Death” by the media. But Cullen was no mercy killer, nor was he a simple monster. He was a favorite son, husband, beloved father, best friend, and celebrated caregiver. Implicated in the deaths of as many as 300 patients, he was also perhaps the most prolific serial killer in American history.

Cullen’s murderous career in the world’s most trusted profession spanned sixteen years and nine hospitals across New Jersey and Pennsylvania. When, in March of 2006, Charles Cullen was marched from his final sentencing in an Allentown, Pennsylvania, courthouse into a waiting police van, it seemed certain that the chilling secrets of his life, career, and capture would disappear with him. Now, in a riveting piece of investigative journalism nearly ten years in the making, journalist Charles Graeber presents the whole story for the first time. Based on hundreds of pages of previously unseen police records, interviews, wire-tap recordings and videotapes, as well as exclusive jailhouse conversations with Cullen himself and the confidential informant who helped bring him down, THE GOOD NURSE weaves an urgent, terrifying tale of murder, friendship, and betrayal.