The back of THE DEVIL'S SANCTUARY says that it has the atmosphere of Shutter Island and the intensity of Jussi Adler-Olsen so I was expecting something... well big.

And for quite a while this was a fascinating scenario. Estranged identical twins, Daniel and Max, were parted by their parents separation when they were very young. Daniel had a fairly normal, if not slightly doted on upbringing by his mother and her parents, Max not quite as lucky staying with his distant father and raised mostly by a nanny. Nothing particularly unusual in that, although Max has been diagnosed bipolar and is in an expensive Swiss recovery clinic when Daniel goes to visit him.

There's obviously something "not quite right" about the clinic, although it is, on the face of it, fairly serene, routine and seemingly quite supportive and comfortable. Not so comfortable that when Max proposes a swap of identities so that he can get out to sort out some financial problems, that Daniel is exactly willing. Doesn't matter as Max does an identity swap in the middle of the night anyway and disappears. Because they've been playing with identities and appearances anyway, nobody believes Daniel when he eventually protests the swap. Especially as all the documentation that they have on Max indicates that he doesn't have an identical twin.

For the longest time I was really intrigued about where this whole thing was going. Because there was that nagging feeling of something about the clinic, because it was kind of obvious that Max wasn't coming back there were all sorts of possible scenarios building up in my mind as I read on. When the ultimate truth about the clinic comes out I will admit I wasn't 100% surprised, but from there, the wheels started to wobble, and the wobble got stronger and stronger until an ending where, frankly, the wheels were off the car and a couple of kilometres in front of me, looking to cause some serious damage.

Aside from the fact that the ending was, well frankly just daft, there was an overwhelming sense of opportunity lost. Without giving away too much of the plot there's a reason behind that clinic that opened up a heap of possible avenues to explore. Instead we seemed to end up in a pointless heap of contrived situations designed to put characters at risk, even though the reader is well aware that they probably aren't. So I must admit by the end of it, despite finding the early part of the book really engaging, I was disappointed. And mildly annoyed. Especially as THE DEVIL'S SANCTUARY seemed to be a reasonably well written, pointless plot. 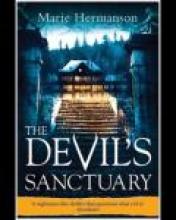 Estranged identical twins Daniel and Max have a complex relationship, so when Daniel goes to visit his bipolar brother in a remote Swiss clinic, he has no idea what really lies in wait for him. Lulled by the peacefulness of the clinic, Daniel finds himself accepting Max's plea for help in taking care of some business, and the brothers swap places for a few days.

But soon Daniel realizes Max isn't coming back, and that the clinic is far from a place of recovery. Struggling to get anyone to believe who he really is, he finds himself trapped in a cruel and secretive prison.