Some reviews are just flat out hard to write.  Normally it's because the book is good, and I'm in real danger of gushing.  Particularly in this case, where gushing got dangerously close to an understatement.

BEYOND REACH is the 10th Joe Faraday and Paul Winter book from British author Graham Hurley.  The series started out as a police procedural, with a good strong "villain" character - a bit of a rough diamond in drug lord with a decent streak, Bazza Mackenzie.  Joe is a long-term cop, once completely content in his role as a DI, single-parent to his profoundly deaf son.  He is a widower with a passion for bird watching, poignantly tentative in his love life, not so content anymore.  Paul was a young cop struggling within a system which he ultimately chucked for the dark side.  At this point the series moved from a really good police procedural to something much more.  The focus on Winter intensifies, although the police side remains involved.  An edge comes in as the two main characters play off each other - sometimes directly, more often indirectly.  Their strong-points and weaknesses are contrasted.  Events are seen from the two viewpoints, the difference between "knowing" and "guessing" on both sides is explored, there's some murky lines between good and bad, black and white.  All of this is just getting better and better with every book.

Winter, working as Bazza Mackenzie's right-hand man, has been involved in some stuff he wishes he hadn't seen.  He's also involved in some positive changes in Bazza's life, as the Mackenzie family attempt a little genuine intervention work with the underprivileged youth of Portsmouth.  Whilst Winter is uncomfortable in the position of working closely with those kids, he also finds he is being drawn closer and closer into the family.  It's this closeness that helps take these books somewhere different.  Winter has a view from within the camp, but not immersion in the life, he's an insider and an outsider all at the same time.  Friend of Bazza's he's also still a friend of his old colleague Joe Faraday.  He's involved with the day to day operations of Bazza's network and family, but he's also not necessarily a crook.  He's taking an interesting path into the world of part-enforcer, part-right hand man, part conscience, part advisor, part observer, part player.  Tricky to have so many parts!

Meanwhile Faraday's got things going on in his own life.  The current case he's working on - the hit & run death of a local thug, seems like it's going to be a simple case of following the obvious.  This victim is a man universally regarded as a bully and the murderer of a young boy, but that police investigation was never able to find witnesses or evidence.  Faraday's biggest problems are in negotiating the politics within the force, and the complications of his home life when his beloved girlfriend packs up and heads overseas on a University secondment, seemingly with little regard to what it will do to their relationship.  Faraday is lost at home, and dispirited at work - the pressures of the force's political and petty power struggles seem to be getting to him.  Because of his general dissatisfaction there's always that elephant in the room - what next for Faraday?

One of the things that this author does incredibly well is provide multiple intersections for the lives of the cops and the villains.  Winter's current project is to find out the facts about Bazza's daughter Esme's affair with a top ranking cop.  A cop that has been involved in major investigations into Bazza's empire.  A cop that Faraday knows.  The kidnapping of Esme's son causes everything to go very pear-shaped, that investigation pulling the two sides uncomfortably close together.  Faraday's hit & run case is close to Bazza's empire - the wild and dangerous world of the housing estates, the drugs, the under-privileged, right into the same environs as Bazza's illegal activities as well as his charity project.

Another thing done well is the way that Portsmouth (or Pompey as it's known affectionately) is portrayed.  The urban decay, crime, desperation of some areas played off against the wealth and privilege of others.  Bazza, as a character, striding through both environments - his wealth earning him a place in the privilege, his background making him more relaxed in the decay.  And it's striking how apt this title is - there's so many things in this world that seem BEYOND REACH.  Peace of mind, pride, escape, retribution, justice, survival.  In different ways, for just about every character in this world, there's something somewhere that's just slightly beyond their reach.

If you're new to the Faraday and Winter series, then dive in somewhere.  It would be better if you could start a little earlier in the series to get you up to speed with the history of these characters and their earlier encounters.  But if you're having trouble getting hold of any of the earlier books - then start with BEYOND REACH.  But if you're a fan of really good English crime fiction - then make sure this series is on your reading lists. 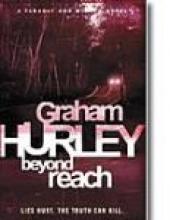 She tried to keep up, tried to focus on the fat grey threads of jelly that laced what remained of this man's head.  Memories, she told herself.  Intelligence.

The very stuff of what we are, of what we do.  Billions of nerve cells that should have warned him to take care when crossing the road.

She closed her eyes and took a tiny step backwards, secretly glad that something like this could still shock her.