The Ned Kelly's will be presented as part of the Melbourne Writers Festival (we'll be there again this year) on the evening of Wednesday 29th July, 2007.

The Betrayal of Bindi MacKenzie by Jaclyn Moriaty (MacMillan)

Behind the Night Bazaar by Angela Savage (Text Publishing)

Written On The Skin by Liz Porter (MacMillan)

Killing For Pleasure: The Definitive Story of the Snowtown Murders by Debi Marshall (Random House)

The Dodger by Duncan McNab (MacMillan)

Things A Killer Would Know by Paula Doneman (Allen & Unwin)

Ten year old Katie Blasko is missing. Detective Sargeant Ellen Destry, alert to rumours of a paedophile ring operating on the Peninsula, is thinking abduction. Her colleagues are thinking bad family, truancy. Her boss is thinking about the media. And everyone, including Ellen is wondering whether she's good enough to handle this without D.I. Challis. But Hal Challis is a thousand kilometres away, watching his father die. Ellen Destry's running the show on her own. And if she's right, Katie Blasko may be running out of time.

When a murder suspect broke her back across a brick wall, Alisha Barba's dreams of being a detective were shattered.  Now on her feet again, but with her career and private life in limbo, she receives a message from an old schoolfriend Cate, who is eight months pregnant and in trouble.

On the night they arrange to meet, Cate is mown down by a car that kills her husband instantly.  As paramedics fight to save her life they uncover the first in a series of haunting and elaborate deceptions.  This is the trigger for a dangerous quest that will take Alisha from the East End of London to Amsterdam's red-light district and into a murky underworld of sex trafficking, slavery and exploitation that stretches from the desolate hillsides of Afghanistan to the comfortable middle-class suburbs of London.

As the shadows across her landscape deepen, Alisha and her old boss, Detective Inspector Vincent Ruiz, must confront their own prejudices and will come to question the very laws they have sworn to uphold.

Gina Davies, aka The Doll, is a 26-year-old pole dancer at the Chairman's Lounge in Sydney's Kings Cross. She's a flawed woman, racist, obsessed with money, who finds her life suddenly being destroyed by the things she has up until that moment most firmly believed in.

The evening of the Mardi Gras, 2007. Three unexploded bombs have been found that day at Homebush Stadium, so the country is on high-alert. When wandering through the Mardi Gras' crowds the Doll runs into a good-looking, young dark man. They end up at his place. When she wakes, it's Sunday morning and he has gone. She is getting a coffee in a cafe opposite the apartment block she spent the night in when she sees armed police surround the building she has just left. Later in the day while shopping in the city she sees a story on a big video screen in which the news is of a suspected terrorist entering the same building she had spent the night in.

That night, on television news, the story has altered a little. In an exclusive, the network has security camera footage of the terrorist entering the building the night before with an accomplice, a woman she recognises as herself. And so a case is brought against her by the media, and the hunt for her begins.

From a 26-year-old pole dancer in the Chairman's Lounge, she quickly becomes the most wanted woman in Australia as every truth of her life is turned into a lie!

Meet Joe. He's a nice guy out to catch a copycat killer. The one copying himself.

Surprising and compelling, this powerfully written novel is a terrifyingly vivid insight into the mind of a serial killer. Joe is in control of everything in his simple life, including both his day job at the police department and his 'night work'. He remembers to feed his fish twice a day and visit his mother at least once a week, although he occasionally peppers her coffee with rat poison.

He is not bothered by the reports of the Christchurch Carver, who, they say, murdered seven women. Joe knows the Carver has only killed six of these women. He knows that for a fact. And Joe is going to find that copycat killer, punish him for the one and then frame him for the other six.

If two people have a conversation heard by only those two, did the conversation actually take place? Following an alleged conversation between respected attorney Rayna Martin and teenager Christina Haynes during a boating trip at Cape Ann, Massachusetts, one of them is dead, the other arrested for murder. Boston lawyer David Cavanaugh faces his toughest case to date as what appears to be a tragic but blameless accident turns into something else entirely. With the victim's father one of the most powerful politicians in the US Senate and the Assistant District Attorney prepared to put his personal ambition ahead of legal justice, David finds that his most dangerous battle is taking place outside the courtroom. Lies, deception, blackmail, threats... and finally the precision of an assassin's bullet combine to create a shocking finale in this exciting debut from Australian author Sydney Bauer.

Skeletons are discovered in Cockpit Lane, a poor black area of inner south London, and DCI David Brock and DS Kathy Kolla of Scotland Yard's Serious Crimes Branch are called in to investigate. The discovery that the victims died on the day of the Brixton riots, over twenty years before, lead Brock and Kolla on a dark and dangerous journey into the heart of the West Indian community in London - a journey in which past and present come together in an intricate web of deception and intrigue, as Brock re-discovers the hand of a formidable old antagonist, Spider Roach.

In a desperate search to find a crucial piece of missing evidence, Brock and Kathy unwittingly set in train a series of events that end in a shocking, violent conclusion.

• Before each school year begins, she memorises departmental outlines of her subjects. That way, she can gently prompt those teachers who forget or stray from the course.

• She reads up on common teen anxieties, and offers lunch-time advisory sessions in a relaxed, convivial setting (the locker room).

But Bindy suspects that something may be missing – something more than the 0.1 she needs to make the 100th percentile. And, on the first day of Year 11, at the first session of the FAD (Friendship and Development) Project, her worst suspicions are confirmed.

So Bindy makes a decision. Enough of this compassionate Bindy; she has been wasting her time. The real and ruthless Bindy is about to emerge.

Emily Tempest has been away from Central Australia for a long time - uni, travel, dead-end jobs. Finding trouble all over the world. Now she's back at Moonlight Downs, the community where she grew up, half in the Aboriginal world, half in the white. And true to form, there's trouble. An old friend brutally murdered and mutilated. An old enemy the only suspect. Until Emily starts asking questions.

Take a nail-biting mystery, an epic setting and a heroine with a talent for stirring things up. Throw in an affectionate flogging of outback Australia's melanoma-encrusted hide - and Diamond Dove may be the wittiest and most gripping debut of the year. 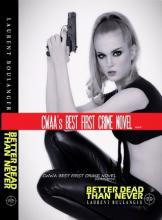 Patricia Lunn takes on a hopeless case after an old friend from her days in uniform asks her to dig into a supposedly wrongful conviction of a serial rapist turned killer.

But as she knocks at the doors of the city's most influential people, someone wants her dead before she finds out the truth.

She uncovers a world filled with police corruption, racism, sexual debauchery and a killer who will do anything to protect his identity... including putting a contract on her head.

Who said crime doesn't pay? Australian expat Jayne Keeney lives in Thailand and works in Bangkok. When she heads north to Chiang Mai to visit her good friend Didier, she soon discovers that the local police have an especially cosy relationship with money and illegal acts. When Jayne learns of this, she realises she is in danger.

As an experienced forensic pathologist, Malcolm Dodd thought he had seen everything. But when he arrived in East Timor they told him he would have to "harden up", They were right. Justice for the Dead looks at what goes on behind the scenes of some of the most brutal mass murders of modern history. It's a compelling personal account that takes the reader from East Timor to mass graves in Kosovo and the jungles of the Solomon islands.

A cruise was once the trip of a lifetime: a byword for refinement, luxury, romance, the millionaire lifestyle. No longer. Boats are bigger and brasher, and every year more and more people of all ages and walks of life are clambering aboard to join the party. But are they safe? Out at sea, there are no police. Many cruise ships fly flags of convenience, sailing in murky legal waters. Reports of disappearances, disease, death and debauchery are becoming alarmingly frequent. Can you be sure your dream holiday, or your ship, won't end up on the rocks?

Gwyn Topham, travel editor of Guardian Unlimited, talks to crew and passengers in Australia and around the world to find out what really happens on the high seas. In tales spanning ships from the Fairstar to the QM2, he discovers pirates and pollution, missing persons and mutinies, colourful captains and crew, and passengers whose antics would make your hair curl. You cannot afford to get aboard until you have read Overboard: the stories cruise lines don't want told.

This is the relentless and remarkable story of life on the inside of two of Australia's most brutal prisons - Grafton and Katingal - in the '70s, written by a convicted bank robber.