My earliest memories stem from a deep sense of connection to the spiritual world. Initially drawn to religious teachings during my childhood and early adult years I soon became disillusioned by the restrictive doctrine and its inability to satisfy the truth I was seeking. Marriage and the birth of my two children, brought immense joy. Happy to be a stay at home mum, in their formative years, once they commenced school I felt compelled to embark on studies within the field of science and completed a four year Diploma in Health Science (Massage Therapy). During this time my marriage came to an end and I embraced the role of single parent. After establishing a private practice which focused on the integration of therapeutic massage techniques with the essence of divine healing energy I felt professionally fulfilled throughout the next ten years. Suddenly after turning 40 things began to change and I had a sense my destiny lay elsewhere. I closed the door on self employment and moved on to working for others within the health industry. This period was thwart with personal dissatisfaction and it soon became obvious that fate had something else in store. Crippling migraines forced me to resign from the comfort zone of paid employment and brought overwhelming isolation into every facet of my life. Within the dark void which followed I lost my sense of self , physically, mentally , emotionally and spiritually. I withdrew from the world, those I loved and my connection to the spiritual realm. It was at this profound moment in time, one of total blackness, overwhelming emptiness when enlightenment occurred. Inspiration manifested through meditation. A book of blank pages appeared, I began creating characters, the formulation of a story which encompassed, unified the scientific world with the dimension of the afterlife. The following morning I began to write. What unfolded over the next two years was to be the most truly amazing experience. A journey of healing my physical and spiritual being and the meaning behind my illness. Now with my novel finally completed I hope you, the reader of my words will embrace the parallels uniquely linked between science and spirituality, our human existence and the eternal survival of the soul. 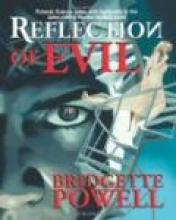 Reflection of Evil
2011
Posts About This Author