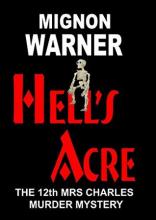 Amber Rojano, a beautiful young Romany gypsy, loved to dance, and it would be fair to say that this is what cost her her life, even though her body was never discovered.

Some years after her mysterious disappearance, Amber’s physically abusive, universally disliked partner, Adam Newton, made an appeal against his conviction for her murder. Finally acquitted of the crime on a technicality, he approaches Edwina Charles, the clairvoyant, asking her to assist him with a reading of the tarot cards to prove beyond all doubt that he had no direct hand in Amber’s disappearance. Despite her belief in his innocence, Mrs Charles refuses to help him.. Mrs Charles has conflicting interests in the matter. Gypsy Luke Rojano, Amber’s grandfather, is a friend, and Luke is determined to make Newton pay for the crime which, with the exception of Mrs Charles, no one doubts Newton committed.

And then events take a dramatic turn. A female skeleton is unearthed on Hell’s Acre which was once the travellers’ camp site where Amber was born and spent her early childhood years and which is now owned by the clairvoyant’s brother. Newton’s arrest following this discovery changes everything. Mrs Charles is now involved in the disappearance of Amber Rojano far more heavily than she would ever have imagined. Her belief in Newton’s innocence of the murder of Amber, however, is undiminished, all the more so when the remains of the skeleton give up only more questions to be answered, including those she finds herself faced with following the discovery of the body of a complete stranger, known only as Elena Butterly, in the wood at the bottom of her garden.

It is the most complex case the clairvoyant has ever undertaken and for the most part, she is obliged to investigate it entirely on her own. Ex-Detective Chief Superintendent David Sayer, who has worked in partnership with her in the past on various problematical cases undertaken by her, shares the opinion of everyone else. Adam Newton is and was guilty of the murder of Amber Rojano. But was he? That is the task Mrs Charles sets for herself, the answer to which lies in her reading of the tarot for Adam Newton with its shocking consequences for all concerned. 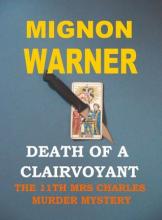 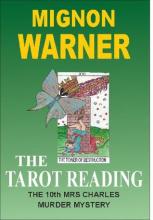 The Girl Who Was Clairvoyant
Book Number:
4
1982