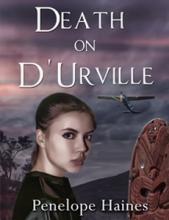 Death on D’Urville is the first novel in a new mystery series featuring Claire Hardcastle, commercial pilot and flying instructor, who operates out of Paraparaumu airport in New Zealand.

Claire Hardcastle is fiery, clever, daring —and she’s trying to prove herself in a man's world. Recently recovered from a disastrous relationship with her ex, she’s determined from now on to live on her own terms.

A high level of confidence is required to handle the varied risks and responsibilities of aviation, and flying attracts alpha type personalities. Claire is no exception, but there is a fine line between confidence and it’s mirror image arrogance, a line Claire sometimes struggles to negotiate successfully. Fortunately she has her boss Roger, and her sister Kate to keep her in check.

When her routine flight to pick a passenger up from a remote island in the Marlborough Sounds turns into a murder investigation Claire is excited to discover she may hold a clue to the crime.

Greville Harbour is home to a small number of people who, like the deceased Jorge, come to stay for short periods in their holiday homes, and Claire, whose job it is to fly them to and from the mainland has known them for several years. On the face of it, none look likely to be the murderer. Why would anyone want to murder an inoffensive, reclusive novelist?

Claire’s interest in solving the murder is heightened by her growing attraction to Detective Sergeant Jack Body.

The key to solving Jorge’s death depends on unravelling a tangle of motives as diverse as rifled grave goods, artefact smuggling, disputed Maori history, breached tapu, and child abuse. It seems many people had a reason to murder the man who used to be Claire’s passenger, and Jorge was not the man she thought she knew. When his criminal history is exposed, Claire unwillingly finds her sympathies realigning with the murderer.

As Claire and Jack’s professional and personal partnership deepens they have to accept that, for others, obsession can turn sour, love can be twisted and traumatised and one man can unleash a malignant strain that leads to murder.

Penelope Haines became a writer when she realized she could gaze out of the window with a glass of wine in her hands and claim to be working.  Her previous occupations of Nurse, Management Consultant, Parent, Farm Manager, CEO and Commercial Pilot failed to achieve this simple clarity. Her training as a nurse taught her not to kill patients; her training as a flying instructor convinced her to be patient as students attempted to kill her. Penelope’s current status as ‘alive’ is a testament to the speed of her reactions.  Writing detective novels allows her to explore new and creative ways of murdering those who have offended her. So far the results of that exploration have remained purely fantastical. Penelope's interests are centered round reading, writing, music, theatre and horse-riding. She maintains she is a single minded person, having one dog, one cat, one horse and one husband. 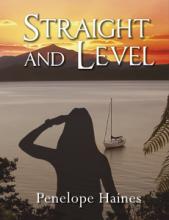