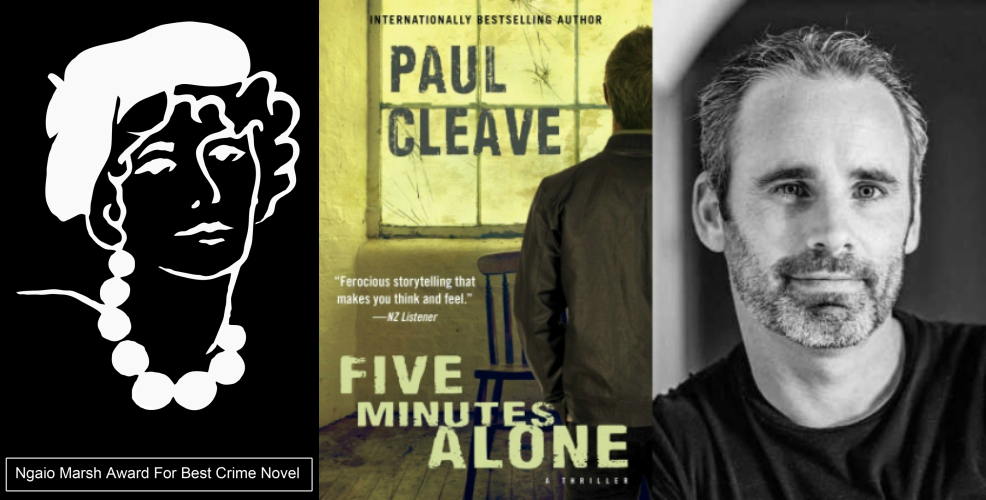 Paul Cleave became the Crown Prince of antipodean crime writing when his thriller FIVE MINUTES ALONE was named the winner of the 2015 Ngaio Marsh Award for Best Crime Novel on Sunday night.

The internationally bestselling author made history when his “gritty and thoroughly absorbing” novel that “evokes complex feelings about retribution and morality” was revealed as the winner before a packed hometown crowd at a lively WORD Christchurch event at the Court Theatre on 4 October.

“In a year with a remarkable quintet of finalists, it’s fitting that Paul Cleave has become the first author to win the Ngaio Marsh Award twice,” said Judging Convenor Craig Sisterson. “For almost a decade he’s been leading our vanguard on the world stage in what’s becoming a new heyday of local crime writing.”

In FIVE MINUTES ALONE, “wonderfully complex protagonist” Theo Tate has been resurrected, as a cop and human being, after recovering from a coma. He finds himself chasing a killer he can empathise with: a vigilante who is disposing of society’s worst offenders, giving victims of crime their ‘five minutes alone’ with the culprits. But settling old scores is never as simple as it seems, as Tate knows well himself.

The judging panel, consisting of crime fiction experts – authors, critics, and editors – from Scandinavia, the United States, Great Britain, Australia, and New Zealand, said FIVE MINUTES ALONE was packed with “moral dilemmas, and great writing, pacing, and characters,” and demanded to be read in one sitting. “The characters are sympathetic and human, never becoming black and white or easily classified as good or bad,” noted one judge. “Cleave’s prose crackles like a campfire, darkly hypnotic and dangerous.”

Cleave had previously won the Ngaio Marsh Award in 2011 for BLOOD MEN. The Award is made annually for the best crime, mystery, or thriller novel written by a New Zealand citizen or resident. Cleave also received a set of Dame Ngaio’s novels courtesy of her publisher HarperCollins, a cash prize provided by WORD Christchurch, and an invite to appear at a European crime writing festival.

For more information on the Ngaio Marsh Award, go to www.facebook.com/NgaioMarshAward(link is external) or email ngaiomarshaward@gmail.com(link sends e-mail), or to contact the Judging Convenor directly: craigsisterson@hotmail.com

In the latest thriller by the Edgar-nominated author of Joe Victim, someone is helping rape victims exact revenge on their attackers, prompting an edge-of-your-seat, cat-and-mouse chase between old friends, detectives Theodore Tate and Carl Schroder.

Carl Schroder and Theodore Tate, labeled "The Coma Cops" by the media, are finally getting their lives back into shape. Tate has returned to the police force and is grateful to be back at home with his wife, Bridget. For Schroder, things are neither good nor bad. The bullet lodged in his head from a shooting six months ago hasn't killed him, but, almost as deadly, it's switched off his emotions.

When the body of a convicted rapist is found, obliterated by an oncoming train, Tate works the case, trying to determine if this is murder or suicide. The following night, the bodies of two more rapists surface. It's hard to investigate when everyone on the police force seems to be rooting for the killer.

There's a common plea detectives get from the loved ones of victims: When you find the man who did this, give me five minutes alone with him. And that's exactly what someone is doing. Someone is helping these victims get their five minutes alone. But when innocent people start to die, Tate and Schroder find themselves with different objectives, and soon they're battling something they never would've expected: each other.