Book 26 in the overall series, number 5 in the Death sub-series, and I've not regretted a single second of the time spent listening to the audio of the Discworld novels from start to finish. This one contains one of my all time favourite Terry Pratchett quotes, with the exchange that leads up to it for context:

"They're going to do something to time? I thought they weren't allowed to do things like that."

NO. BUT HUMANS CAN. IT HAS BEEN DONE ONCE BEFORE.

Susan stopped. Of course someone would be that stupid. Some humans would do anything to see if it was possible to do it. If you put a large switch in some cave somewhere, with a sign on it saying "End-of-the-World Switch. PLEASE DO NOT TOUCH," the paint wouldn't even have time to dry.

THIEF OF TIME gets very existential as the Monks of History, whose job it is to see that tomorrow happens, are up against the Auditors, who would much prefer that humanity stops it with all the unpredictability. Luckily Lu Tze, the Swepper, has dealt with this sort of carry on before, and his new apprentice Lobsang Ludd is gifted, in ways he doesn't even know about. Of course Susan is there to put things into perspective, and hand out the gold stars or standing in a corner moments, whilst Death, well finds himself in danger of being out of a job and that simply will not do.

Madcap as always, but again with a message buried just below the surface, THIEF OF TIME was listening time well spent. 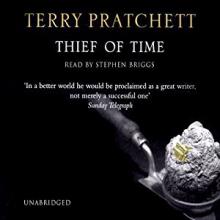 The Monks of History live in a Tibetan sort of area known as "enlightenment country." Their job: "to see that tomorrow happens at all." A mysterious Lady wants time-obsessed Jeremy Clockson to build a totally accurate glass clock. It will trap time and stop it, eliminating humanity's irritating unpredictability. This would make the Auditors, who observe the universe and enforce the rules governing it, very happy. It would also put Death out of a job, which the Grim Reaper isn't happy about. Fortunately, the History Monks have encountered this situation before; in fact, Lu Tze, the Sweeper, has personally dealt with it before. Even better, he has a new, gifted apprentice, Lobsang Ludd, the "thief of time." This time, they'll stop trouble before it can start! To add chaos to the mix, there's the Fifth Horseman of the Apocalypse--the one who quit before they became famous.