STRATTON'S WAR is the first in an new planned series of crime novels featuring Ted Stratton, a Detective Inspector in the London police during the Second World War.  This book includes a second protagonist - Diana Calthorp, young, socialite, not long and unhappily married and unexpected MI5 agent, involved in a covert operation against sympathisers and spies in the local community.

It's a very elaborate, multi-layered story.  The death of a silent film star who hasn't worked for many years is the starting point.  It's an investigation that Ted cannot put aside, despite a verdict of suicide.  Diana starts work as a clerical assistant in MI5 but soon finds herself infiltrated into a group of well-to-do and well-known people, suspected of being Fascist sympathisers or spies.  There's Ted's own family situation - a loving relationship with his wife, made tense by the evacuation of their two young children.  There's the brother-in-law that Ted really struggles to deal with, and a problem nephew.  Diana has gotten herself into a very unhappy marriage, with an overbearing and controlling mother-in-law, her husband is now serving in the Armed Forces.  Diana's romantic liaison with another MI5 operative - a known womaniser - despite all the warnings that he's not to be trusted, despite threats from her mother-in-law, makes her realise she doesn't want to be married to her husband anymore.

The book weaves its way through all of the various threads of investigation and private life as it slowly draws a complicated web of crimes, espionage and the personal, slowly to the point where Diana and Ted's paths cross and the realisation that the Underworld and the Secret Service operate in very similar ways.

The thing that made STRATTON'S WAR really work for me was the way that there were multiple threads and a strong dose of the personal throughout the book.  Some readers may find that less satisfactory, but for this reader, it created an atmosphere - a world if you want, that the characters inhabit.  Some readers might find Diana's affair and the concentration on her personal feelings annoying (and I will agree she was a bit dangerously close to being whiny in places), but she's a young woman, in a weird time in the world, and it illustrated that she was a very young, inexperienced woman - one of the least likely people called upon to perform the most unlikely duty in the middle of war.  The crime investigation, conducted within the background of a war, with nights spent in air-raid shelters, police stations being bombed into oblivion, and an old body being revealed in the bombed out remains of a church starkly revealed that even in extraordinary times, in the middle of a war, local criminals continue operations and family relationships remain complicated.

STRATTON'S WAR won the 2008 CWA Ellis Peters Historical Award(link is external).  The award is given to the best historical crime novel (set in any period up to 35 years prior to the year in which the award will be made) by an author of any nationality. 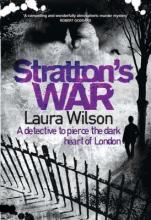 London, June 1940.  When the body of silent screen star Mabel Morgan is found impaled on railings in Fitrovia, the coroner rules her death as suicide, but DI Ted Stratton of the CID is not convinced.  Despite opposition from his superiors, he starts asking questions and it becomes clear that Morgan's fatal fall from a high window may have been the work of one of Soho's most notorious gangsters.

MI5 Agent Diana Calthrop, working with senior official Sir Neville Apse, is leading a covert operation when she discovers that her boss is involved in espionage.  She must treat carefully - Apse is a powerful man and she can't risk threatening the reputation of the Secret Service.  Only when Stratton's path crosses Diana's do they start to uncover the truth - that the intrigues of the Secret Service are alarmingly similar to the machinations of war-torn London's underworld.