THE JACK IRISH QUINELLA brings together the first two (of the present four) books in Peter Temple's Jack Irish Series. Both books were originally published in 1996 and 1999 respectively.

Jack calls himself a suburban solicitor, although these days he mostly confines himself to the occasional lease or conveyance. Since the murder, by one of his clients, of his second wife, Jack has lost a lot of interest in being a lawyer. After a sustained bender over a number of years, he has kept his own one man practice, but sustains life and limb with a weird combination of looking for lost people and stitching up race bookies. He sustains soul and psyche learning how to be a fine cabinetmaker and longing for his beloved Fitzroy Football Club, since it was forcibly merged and moved to Brisbane. He looks for lost people, witnesses, people who owe other people money, whatever is required for the mysterious and eccentric Cyril. He stitches up bookies with Harry and Cam and a team of commissioners. He hangs around the Prince of Prussia with a group of the old true 'Roy Boys. He makes furniture with Charlie. He longs for love, sometimes he finds it, sometimes it seems to slip past him.

In Bad Debts, the first book in the JACK IRISH QUINELLA Jack is in no particular hurry to find out why an old client of his is desperately trying to get in touch. Danny was a client just after Jack's wife was killed and he's well aware that he probably didn't do the best by Danny, especially as he's got to go back and find out what the story of Danny's legal tribulations was. When Danny is shot dead by the Police in a car park while he was waiting for Jack (who hadn't even agreed to show up), Jack thinks he probably owes Danny a few well-placed questions. Sure the questions lead Jack to the very attractive journalist Linda, but they both soon find that Danny was involved with people who don't really care what it takes to keep out of the news and the courts.

In Black Tide, Des Connors is an old mate of Jack's father, Des was there the day that Jack's parents met. Des is a nice old bloke, saddled with a prodigal son who has now gone missing with $60,000.00 that Des lent him, leaving behind a mortgage on the house that Des has lived in all his whole married life. As Jack starts to look for Gary, lots of trees start shaking and all sorts of crooks, Government Ministers, corporate tycoons, government agents, and shady deals start to fall out, mostly on Jack's head.

THE JACK IRISH QUINELLA is a great starting point for those that haven't read the 4 books that make up this series. As with his later books, Temple has a knack for writing an Australian story. The people that hang around the pubs are the sort of people you (hopefully) still see sitting around old pubs in inner suburbs or out in the bush. The goings on at the racetrack have been going on for years, the characters are just the same as the ones that you rub up against in the ring or around the birdcage. And there's subtle justice in THE JACK IRISH QUINELLA – the bookies normally go home in the posh imported car, whilst the punter takes the train!

The major attraction of the entire series is Jack himself, and the people who surround him. There is a lovely ensemble cast of the vaguely dotty, slightly shady, mysterious, scheming, fanatical, flat out mad, cunning and deeply philosophical (in their own way). There's lovely touches of an almost old fashioned Australian way - football, horse racing, pubs, tradition and mateship. There's a bit of romance gained, romance lost and longing. There's some very unlikely, complicated crimes going on and if you stop for a second you have to wonder how a suburban solicitor can possibly get himself into these spots.

Whether or not the crime is realistic, whether the level of police corruption is feasible and the involvement of the stratospheres of corporate and politics is vaguely possible, you really don't care. You just want Jack to solve the problem, preform a few of those “more luck than planning” feats of daring; get the girl; drink the wine and solve the problems of the world. You even care that he finds himself a team to support. Now any writer that can interest this reader in things Australian Rules Football is a writer worthy of respect. 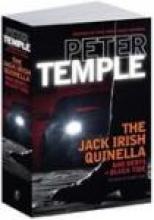 Bad Debts (Winner of the 1996 Ned Kelly Award) Ex-lawyer Jack Irish is in no special hurry to return a call from ex-client Danny McKillop. For one thing, they go back to a time Jack would rather forget. But when Danny is shot dead by police in the carpark of The Hero of Trafalgar, Jack reckons he owes Danny a few well-placed questions. Trouble is, the answers could take him to some very bad places indeed.

Black Tide Des Connors was there when Jack Irish's father met his mother. Now he wants Jack to look for his own son, a bad seed who's gone missing with $60,000 of Des's money. But it turns out that, as sons go, Gary Connors is more prodigal than most. And he's got some very good reasons for staying lost.