THE CROSSING - B. Michael Radburn

Even allowing for the theories about the limited number of plot lines there are out there, it's always surprising when you come across a couple of books that have a central premise that's remarkably similar, written within the same time period.  And this isn't a particularly common shared premise.  THE CROSSING by B. Michael Radburn is the second book with a male protagonist mourning the inexplicable and sudden disappearance of a much loved young daughter.  In THE CROSSING Taylor Bridges' is completely traumatised by the unexplained vanishing of his daughter Claire - so much so that his marriage falls apart, and he exiles himself to a small town in Tasmania.

Bridges is a national park ranger, and somehow this new job, based on the fringes of a drowning town, in the dark, damp and cloying forests of Tasmania fits.  He mourns his daughter as the community around him mourns the loss of their town, overall there's a sense of loss and despair everywhere.

As with the first book I read on this theme, there are elements of the supernatural.  Bridges does see / talk to his daughter and whilst there's definitely a feeling of the "other" about that aspect to the book, overall it seems to fit within what is really a very creepy, odd, unsettling sort of atmosphere.  Bridges is uncertain, unsure, suffering, frightened and yet baffling, questionable.  He is a chronic sleepwalker, often waking up outside his cabin, cut and bruised, with no idea what he has been doing or where he has been.  Which doesn't help when a little girl goes missing from the neighbourhood.  A little girl he's recently spent time with.

Undoubtedly the feeling that you come away from THE CROSSING with is overwhelming grief, although along the way there's just creepiness, disquiet and discomfort.  As the story of how Claire Bridges came to disappear is revealed, Bridges' overwhelming sense of loss, responsibility and complicity matches perfectly with the weird, insular, dark, enclosed and vaguely sinister world that he now lives in.  Even the possibility that supposedly extinct Tasmanian Tigers could be lurking in the surrounding forest seems to fit with the idea that this place, this little drowning town, is just slightly off.

The earlier book I read covering this subject matter is one of my favourites, but then the author of that book is the only person that has yet been able to convince me to read horror or vampires and not run screaming from the room.  So I was a little leery when I realised what was going on in THE CROSSING.  Would it stand up against the earlier one?  It's undoubtedly a different book and whilst the supernatural elements don't come across as intrinsic to our culture or sense of place, they absolutely do work in terms of this man's mind, his state of being if you like.  The story of the disappearance of Claire is slowly revealed, it's plausible and undoubtedly poignant, and whilst the discovery of the truth may require a little suspension of disbelief, the result is really quite moving.

Radburn has written a most unusual book in THE CROSSING.  Even if, like me, you're very leery of supernatural elements, if horror normally leaves you more than underwhelmed, the emotional journey of this man, combined with the wonderful sense of place that is built around him, really makes THE CROSSING one of those books to step outside your comfort zone with. 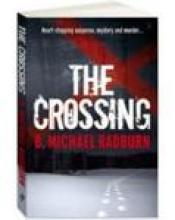 Redemption is born of guilt, and weighs heavy on even the strongest man.

Traumatised by the disappearance of his daughter Claire, Taylor Bridges' marriage breaks down, and he exiles himself to Glorys Crossing in Tasmania. Taylor is the only ranger in this isolated town adjoining a national park... a town dying a slow death as the rising waters of the new dam project slowly flood it.

Struggling with the guilt of Claire's disappearance, Taylor is a chronic sleepwalker. When another young girl the same age goes missing, Taylor begins to question himself... uncertain of what happens when he sleepwalks.

It's a race against time not just to find the missing girl, but in Taylor's search for redemption and a past better left lying at the bottom of the new lake.