Hands up if you, like me, a died in the wool thriller fan, were just a bit hesitant about BLACK MAN when you saw "science fiction".  All I can say is put your hands down and get to a bookstore!

Carl Marsalis is a 13, but he works for the UN, tracking down rogue thirteens.  Not a particularly pleasant job really - he's loathed by the other 13's as a traitor and a sell out.  The rest of the community regard him as a twist, treating him with suspicion and frequently fear.  Thirteen's have a reputation.  In BLACK MAN Carl is released from jail to help track down a very rogue 13.  After what seems to have been an on purpose crash of a ship from Mars, Merrin is lose on earth and his genetic trace is found at a startling number of brutal murder scenes - in Rim State and in surrounding territories.  Merrin has obviously been bought back to earth as some sort of a hired killer but nobody knows why, or who his victims will be, or how they could even be connected.  COLIN operatives Sevgi Ertekin and Tom Norton must work with Carl to find the killer and stop him.

BLACK MAN builds a world in the future that's not so far removed from the current that the reader feels stranded.  The geography of Earth hasn't changed - the nations, in the main, still exist.  Mars is now a colony of Earth, serving as a resource and almost a penal colony, and a secession has split America into two parts.  There's highly advanced technology - space travel / general travel; advanced medicine; genetically engineered humans; even basic blinds in your home are different - but none of the "science fiction" is too hard to swallow, in fact it almost becomes invisible within the story. There's still the problem of catching the right flights to catch the shuttles; there are gardens and streets; tensions within families; racial differences; the problems of hangovers and getting shot still hurts, but all of it has a general feeling that this is life as you could believe it could be.  Sure there's drugs that help with the hangover that we could only dream of nowadays - but that's the point - it doesn't seem unreasonable to dream.

Within the world that BLACK MAN creates there are also some telling points about humans in the future and how far we haven't gone.  It's no co-incidence, one would assume, that Carl is a variant thirteen and a black man.  There's a telling multi-layered prejudice being explored here.  The full range of genetically modified humans are distrusted, marginalised, despised frequently, just as are humans from other nations and states (which is still going on in BLACK MAN's future).   Within circles there are levels of hierarchy, even within each specific group there are levels and Carl, as a Black Variant thirteen is marginalised.  Get him working to catch rogue 13's and he's so far on the outside that he belongs nowhere.  Of course 13's don't really have feelings of attachment or empathy for others, but then Carl's just that slight bit different from everyone else.

At close enough to 550 pages long, BLACK MAN is a thumping big tome.  Love interests that really work; social observation that is as valid for today as it seems it could be in the future; human foibles and frailty in all it's "glory"; I laughed, cringed, sniffled, cheered and read bits peaking through my fingers. No padding, fast paced, totally absorbing with a lot going on - there's some great things being said by BLACK MAN. 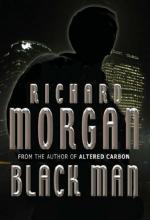 The future isn’t what it used to be since Richard K. Morgan arrived on the scene. He unleashed Takeshi Kovacs–private eye, soldier of fortune, and all-purpose antihero–into the body-swapping, hard-boiled, urban jungle of tomorrow in Altered Carbon, Broken Angels, and Woken Furies, winning the Philip K. Dick Award in the process. In Market Forces, he launched corporate gladiator Chris Faulkner into the brave new business of war-for-profit. Now, in Thirteen, Morgan radically reshapes and recharges science fiction yet again, with a new and unforgettable hero in Carl Marsalis: hybrid, hired gun, and a man without a country . . . or a planet.

Marsalis is one of a new breed. Literally. Genetically engineered by the U.S. government to embody the naked aggression and primal survival skills that centuries of civilization have erased from humankind, Thirteens were intended to be the ultimate military fighting force. The project was scuttled, however, when a fearful public branded the supersoldiers dangerous mutants, dooming the Thirteens to forced exile on Earth’s distant, desolate Mars colony. But Marsalis found a way to slip back–and into a lucrative living as a bounty hunter and hit man before a police sting landed him in prison–a fate worse than Mars, and much more dangerous.

Luckily, his “enhanced” life also seems to be a charmed one. A new chance at freedom beckons, courtesy of the government. All Marsalis has to do is use his superior skills to bring in another fugitive. But this one is no common criminal. He’s another Thirteen–one who’s already shanghaied a space shuttle, butchered its crew, and left a trail of bodies in his wake on a bloody cross-country spree. And like his pursuer, he was bred to fight to the death. Still, there’s no question Marsalis will take the job. Though it will draw him deep into violence, treachery, corruption, and painful confrontation with himself, anything is better than remaining a prisoner. The real question is: can he remain sane–and alive–long enough to succeed?