THE CHALK CIRCLE MAN is the first book in the Adamsberg series by French writer Fred Vargas.  As they have been translated out of series order, fans of this fantastic set of books know Adamsberg well by now, without having had the chance to be in at the beginning so to speak.  This release gives the reader a unique opportunity.  For existing fans a chance to see where Adamsberg came from, and to consider a first book, in light of knowing how good the series has become.  For new readers a chance to start at the beginning if that is your preference.

The strange blue circles that start appearing overnight on the pavements of Paris, each circle enclosing a seemingly pointless and meaningless little article - cigarette lighters, badges, a hat, a doll's head, seem to most people to be a distraction.  The press take up the story with great amusement and psychiatrists and other experts are soon making pronouncements on what the artist is trying to say (or not!).  Adamsberg seems to be the only person who feels the stirring of malice and sees cruelty in the circles.  He is the only person who doesn't seem all that surprised when the body of a woman is found - her throat savagely cut, placed carefully in the middle of one of the chalk circles.

Adamsberg is not your traditional policeman.  He's unorthodox, seemingly permanently distracted, he's a thinker and an acute, but unobtrusive observer.  He's profoundly aware of human nature yet he often has flashes of insight which seem to have come from nowhere.  He constantly baffles his colleagues but his methods work and he's comfortable with who he is.

The thing a new reader to this series is going to get most clearly from THE CHALK CIRCLE MAN is a sense of the quirkiness of Adamsberg.  The other ongoing feature of the books is the wonderful cast of supporting characters - mainly of them as eccentric as Adamsberg.  All the characterisations become more assured as the series goes on, and at no stage does anyone become cartoonish or unbelievable.  There is something quintessentially French about Adamsberg and the world that he inhabits - to this outsider at least.  There's also something delightfully matter of fact about them all, and in particular, the way that Adamsberg works - leaving it totally up to his colleagues to adjust, just as it will undoubtedly require from some readers.

I understand that the translation order of a series is often dictated by the perceived popularity of a particular book.  Perhaps it was felt that the character of Adamsberg got stronger, more clearly drawn in later books.  Perhaps it was felt that the plot was not quite as unique as some of the later books.  Regardless of the reason, it's a good book, it introduces Adamsberg with a very deft touch, and it does hint at where the rest of the series is going.

If you're new to the Adamsberg series, you could start with THE CHALK CIRCLE MAN and get a sense of how the rest of the series is going to progress.  You can also read the entire series out of order if needs must and that's how the books become available for you.  But if you're a fan of something with a strong sense of a place and the people, with a central character who is not afraid to be a little odd, a little eccentric, a little different; decent, caring and extremely human make sure you read these books.

The books in translated order:

There is also a standalone novel, released in translation in 2006 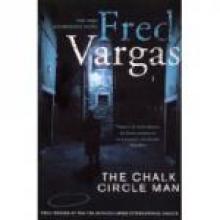 Jean-Baptiste Adamsberg is not like other policemen.  His methods appear unorthodox in the extreme:  he doesn't search for clues; he ignores obvious suspects and arrests people with cast-iron alibis; he appears permanently distracted.

When strange blue chalk circles start appearing overnight on the pavements of Paris, the press take up the story with amusement and psychiatrists trot out their theories.