Promised myself that I would go back to the very start of the Discworld series and work my way through, just because. It's a bittersweet experience, and it's bringing back some rather uncomfortable memories of giggling my way through many commuter journeys with a lot of space around me, despite the crowded train / tram.

In the beginning there was…a turtle.

Somewhere on the frontier between thought and reality exists the Discworld, a parallel time and place which might sound and smell very much like our own, but which looks completely different. Particularly as it’s carried though space on the back of a giant turtle (sex unknown). It plays by different rules.

But then, some things are the same everywhere. The Disc’s very existence is about to be threatened by a strange new blight: the world’s first tourist, upon whose survival rests the peace and prosperity of the land. Unfortunately, the person charged with maintaining that survival in the face of robbers, mercenaries and, well, Death, is a spectacularly inept wizard… 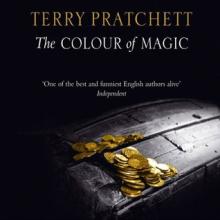 On a world supported on the back of a giant turtle (sex unknown), a gleeful, explosive, wickedly eccentric expedition sets out. There's an avaricious but inept wizard, a naive tourist whose luggage moves on hundreds of dear little legs, dragons who only exist if you believe in them, and of course THE EDGE on the planet...