Marshall Browne, born in Melbourne, was a sixth generation Australian. His forebear, a Calcutta merchant of Irish-Persian parentage, arrived in Sydney in 1809, and bought a grazing property near Cabramatta.With other land granted by Governor Macquarie, he settled down to New South Wales life as both merchant and grazier. He was one of the founders of Australia's first bank - The Bank of New South Wales.

Marshall followed several others of the family line into banking. During 1974-81 he was based in Hong Kong. He began writing novels in his spare time, and three with Far East backgrounds were published in London - the best known of which is City of Masks: a thriller set in Hong Kong's back streets and banking boardrooms which was translated into German, and published in Munich. From 1982-1995 he lived variously in London, Melbourne and Bhutan, in a variety of banking roles. He also served as a commando in the Australian forces, and as a paratrooper in the British forces. 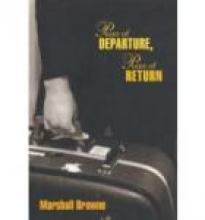 Point of Departure, Point of Return

Inspector Anders and the Prague Dossier
2016

Inspector Anders and the Blood Vendetta
2006

Inspector Anders and the Ship of Fools
2001

The Wooden Leg of Inspector Anders
2000

City of Masks
Posts About This Author