Katerina arrived on a flight from Vladivostok in the early afternoon, the plan already devised for the abduction of the Sharm child. There was no baggage to collect - a single shoulder bag contained all she needed, including a child's Siberian sheepskin coat and a pair of size four, blue rubber boots.

So starts one of the most unusual books I've had the privilege of reading in quite a while. Set across three distinct timeframes, the present is mostly in St Petersburg in the mid 90's. Katerina's arrival, and the unexplained and really odd kidnapping occurs 20 years earlier in Kazakhstan in the 70's, and then there is the USSR in the 1930's with the families of Korean people, who crossed the border into what would become the USSR when Japan annexed Korea in the 1910's, and trying to forge a life for themselves. Stay with me here though, because this sounds complicated but it flows beautifully in THE UNRELIABLE PEOPLE.

The Unreliable People is the name Stalin used for the Koryo-saram. Exiled from Korea, they settled originally in Kazakhstan and ultimately Russia / the USSR. Always regarded as outsiders, they were never really absorbed into Soviet society, always seen as different, struggling to grow rice in the hostile physical environment of the Russian steppes.

Against this backdrop we have the story of a young woman, Antonia, a student at the prestigious St Petersberg Academy of Art. She is Koryo-saram by birth, she is also the kidnapped child referred to in the opening chapter. Why she was kidnapped, what happened is a mystery to her, and to the reader right from the opening pages.

THE UNRELIABLE PEOPLE is a fascinating novel, full of historical snippets that are delivered lyrically, beautifully developed characters, a touch of Korean mythology, and an amazing sense of place and time. The timeline feels complicated when you see it described as I have above, but it's not in the reading. It flows beautifully, rambling through lives complicated by the past, confused by their background, and the unknowns that often come with people uprooted and forced to try to fit in somewhere totally different.

Presented to me as crime fiction, if pushed into a corner, I'd be more comfortable with a classification of historical fiction than anything else. Regardless, the chance to read something as interesting, and rewarding as this was much appreciated. 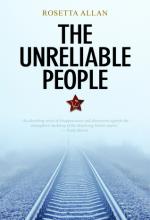 A whole community deported across Soviet Russia, a rice farmer and his wife separated through time, a young art student searching for her identity and for love . . .

Is all love doomed under a heartless regime?

Antonina is a student at the prestigious Academy of Art in St Petersburg. At times, though, she feels she might be a better fit at the Centre of Nonconformist Art across town. She knows she stands out as different, being neither Russian, Korean nor Kazakh — and yet she embodies all three. She is Koryo-saram: a descendant of the exiled population that Stalin labelled the Unreliable People. But what does that mean? And who was the strange, elegant woman who came to the window when Antonina was a young child? And why did she entice Antonina to climb out and go on a long train journey through Kazakhstan?

This is a compelling story where love and loss intersect unexpectedly with a Korean fable about a crow king and a rice farmer’s wife.