Confession time (again!) I wasn't going to read this book.  Nothing personal.  I just looked at the blurb, saw serial killer and thought... over them.  But, long story short, there was this homework assignment, I thought ... proof copy, grabbed the first one I saw, and no homework was done.  Could not put THE STRANGER YOU SEEK down.

The thing that really grabbed me was the central character - Keye Street.  She's got one of those voices that can really appeal to this reader.  A recovering alcoholic with a failed marriage, and a partially acknowledged attraction to her best friend, mentor and cop Aaron Rauser she's a fabulously complicated character.  One of her own greatest critics, Street's got a very chequered background - going from rising star FBI profiler with two university degrees and an enviable criminal profiling track record, to working for herself, making ends meet serving subpoenas, chasing down bail skippers and looking for missing cows.

Obviously there are going to be comparisons drawn with Grace Smith / Stephanie Plum and the like.  Whilst there are elements that are just about identical - the job description alone is enough to get you thinking in that direction.  Add a slightly madcap family; romantic tension; a hefty dose of personal lunacy and a rushing around investigation style and there is a point in the book where you do wonder about the similarities.  For this reader, however, there are some marked differences.  Some nuance about the humour, some of the self-awareness in the character, but probably the biggest difference is a real sense of desire to move on.  The madcap family (sans Grandmother, but with a mother and father who fill in the personality requirements quite nicely), is built around the adoption, by her extremely Southern American sensibility parents, of Street (Asian American) and her brother (African American).  Both the parents have starring roles in the humour department, which was subtle, and clever and frequently laugh out loud funny.  Humour, in particular, is something that does not always travel well culturally, and for this Australian reader, much of the conflict between Street and her mother, and between her mother and father, worked really well - with a stand-out being the father's recitation of grace, which had me roaring with laughter.

The point of these books isn't just the humour.  There's a serious investigation going on, although built around a serial killer, that has some hints and tips along the way that could make a reader wonder if there is something slightly different going on here.

Street also isn't just what you see is what you get.  There's depth, roundedness, flaws and good points to her character that are very engaging. There's an acerbic, pointed and enlightening internal voice that works, not just to give you a chance to get to know the character, but also makes her quite real.  Her supporting cast is relatively well fleshed out also, although, obviously as this is the first book, the concentration is pretty heftily on the main character.  The serial killer thread is nicely done this time, with a final twist in the tail that I simply did not see coming.

That's not to say that everything is perfect and there are some rather hamfisted attempts at humour which don't quite hit the mark... not the least is a tendency to see sexual desire in every lesbian character that Street encounters, but all in all, thanks to THE STRANGER YOU SEEK, once again, "over serial killers" needs an equivocation clause..... 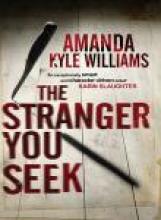 In the sweltering heat of an Atlanta summer, a killer is pushing the city to its breaking point, preying on the unsuspecting, writing taunting letters to the media, promising more death. Desperate to stop the Wishbone Killer before another victim meets a shattering end, A.P.D. lieutenant Aaron Rauser turns to the one person he knows can penetrate a deranged mind: ex–FBI profiler Keye Street.